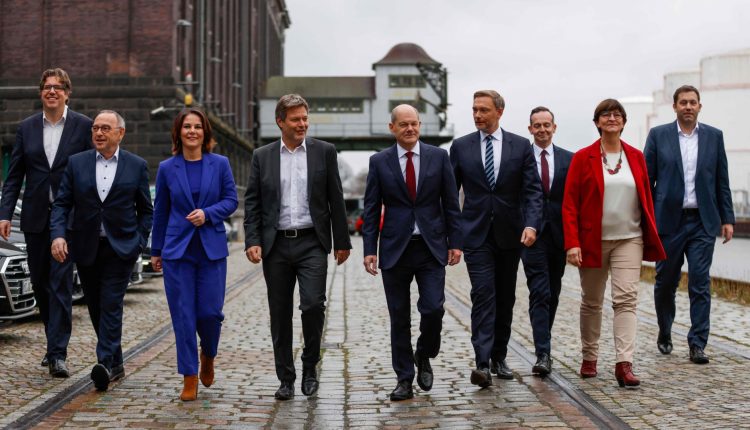 The traffic light parties presented their coalition agreement optimistically but also nervously. Scholz is based on a figurehead of the SPD. Former Chancellor Schröder is apparently not.

The Greens in particular give the impression of being extremely nervous. For them, the most at stake is: the FDP and SPD have the coalition agreement signed by their respective party congresses, and approval is considered certain there. The Greens, on the other hand, let their members decide. In the social networks there are calls to let the traffic light coalition burst.

Party leader Robert Habeck said at the press conference that one had often expected a lot from one another in the negotiations. The FDP chairman Christian Lindner added that they had wrestled for hours over individual sentences. The result: 177 pages with the heading “Dare to make more progress”.

And indeed, there are some progress issues in the contract. There was evidently a great deal of agreement, especially on socio-political issues: The release of cannabis is coming along with automatic motherhood for women who have a child with a woman. The BAföG should in future become more independent of the parents’ wallet. Things that all partners have probably been happy to agree on.

Nonetheless, criticism of the green base is likely to come up for being left empty-handed when it comes to building and transport. In these areas in particular, the mood during the negotiations was rather negative. That probably explains the slightly tense mood among the Greens on stage.

At the press conference it became clear that Habeck will be able to communicate a story about this new coalition much sooner than the possible Chancellor Olaf Scholz. In return, Lindner takes on the hymn of praise for the future Chancellor in a division of labor. During the negotiations, he had come to the conviction that Scholz had what it takes to become a good chancellor, both in character and through his skills.

Scholz obviously does not see himself so much in the tradition of the red-green coalition at the turn of the millennium. Basta politics à la Gerhard Schröder and Joschka Fischer, that doesn’t suit him. The title “Dare to make more progress” shows that Scholz is based on Willy Brandt. The SPD over-chancellor had already led a coalition that modernized Germany after years of standstill. The new traffic light coalition has no less goal.