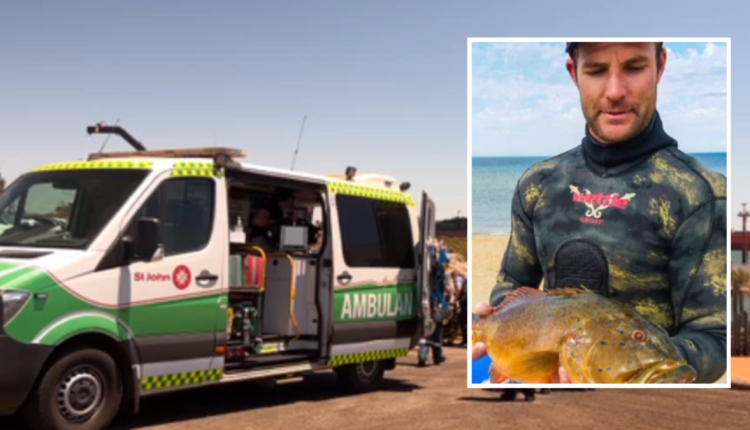 The wife of a man who almost lost his arm when he was mauled by a shark off WA’s coast has described the terrifying moment “all the blood drained from my face” when she got the call.

Father-of-three Robbie Peck was spearfishing off Port Hedland in the Pilbara on Friday when he was bitten several times on his arm and hands.

WATCH THE VIDEO ABOVE: Man attacked by shark off the Pilbara coast.

Paramedics were called to Richardson’s boat ramp about 11.30am after reports a man in his 30s had received serious injuries in a shark attack.

Fisheries officials said Peck was bitten after spearing a fish, but the species of the shark was unknown.

Peck was taken to shore by boat and an ambulance rushed the 38-year-old engineer to Hedland Health Campus under priority one conditions.

Local Wally Galli, who owns GT Diving, received a panicked call from the boat 11km offshore. He said the group was “totally blindsided” when the shark lunged.

“He thinks it was a bull shark … it’s just come and suprised him and got his arm,” he told 7NEWS.

“(It) had tried to go for the fish and misjudged its mark and bit him on the shoulder and it’s let go and had a go at him again and bit him under the arm and on the hand.”

Speaking exclusively to 7NEWS, Peck’s wife Emily recalled the moment she got the shocking news.

“Just that sinking feeling in your gut and I swear all of the blood just drained from my face,” she said.

“It’s not a phone call you ever want to get. You expect the worse straight away when you hear shark attack.”

In a tragic twist, Emily revealed it was meant to be the experienced fisherman’s final trip out on the boat before the couple sold it.

“It was his last trip on the boat, last fish of the day and it happened,” she said.

Peck’s brother-in-law and friend pulled him back on board, where his four-year-old boy was waiting.

“He said his dad is so brave,” Emily said, adding, “I think the boys on the boat kept him pretty sheltered from all the trauma.”

A crew was dispatched from Meekatharra to collect Peck in Port Hedland. The RFDS is flying him to Perth treatment on Friday evening.

Emily is just glad he is safe.

“Some amazing friends came to his aid,” she said.

“It’s a great outcome he’s alive. Thanks to everyone who helped.”

Motorist fighting for life after multi-vehicle crash in Queensland