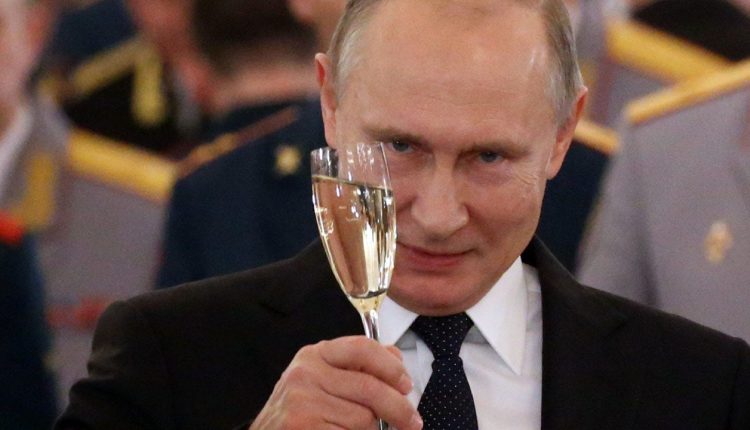 Past birthdays have included lavish gifts from world leaders, hockey games with Russia’s great and good, and down-to-nature forays in the mountains of Siberia. This birthday—and it is a big one—is expected to involve minimal celebration. As Russian President Vladimir Putin turns 70, the question on many minds is not so much “how strong is his body?” but “how secure is his job?”

Mikhail Khodorkovsky, author of “The Russia Conundrum” says there is a wave of sobering realization ripping through Putin’s inner circle, which he believes is glued together by fear and the fact that these cronies are all “tarred with corruption.” The elites know that when Putin dies, and he will one day, they will likely lose their jobs, if not their own lives.  However, Khodorkovsky added that this uncertainty has intensified with the war in Ukraine, which appears to be going badly for Russia.

“If the armed forces of Ukraine continue to win, the threat to the lives of Putin’s entourage will become so great that they may actually try to reduce this threat, by forcing Putin to leave,” Khodorkovsky tells Fox News. “This is an option. Putin understands this and in fact, he is very afraid of this.” What is new for Putin’s people, however, is the possible specter of an even uglier war. And the understanding that if Putin matches words to deeds, they all may be going down.

“What Putin is doing now, threatening the use of nuclear weapons, losing the war, this insane mobilization—this tells these people that by remaining in power Putin poses a threat not only to them and their lives, which many of them have already accepted, but it is a threat to their children and their families.”

Khodorkovsky, the former owner of oil giant Yukos and once believed to be Russia’s richest man, was sent to jail in Siberia for 10 years in 2003 after he began publicly talking about corruption. Putin had made it clear early in his administration that the oligarchs could keep their wealth if they kept silent.

Russian President Vladimir Putin chairs a meeting on the country’s transport industry via a video link in Sochi, Russia May 24, 2022.
(Sputnik/Mikhail Metzel/Kremlin via REUTERS ATTENTION EDITORS – THIS IMAGE WAS PROVIDED BY A THIRD PARTY.)

Now, in exile in London, Khodorkovsky continues the work of his Open Russia foundation, effectively building opposition through media and education, advocating for a functioning parliamentary system for Russia. On the eve of Puntin’s birthday, Khodorkovsky offered his opinion of the Russian president.

THE PACT WITH PUTIN’S BEEN BROKEN

A general view of the Vilnius city municipality building in Lithuania sports a banner proclaiming, “Putin, The Hague Is Waiting For You”, Tuesday, October 4, 2022.
(Fox News Digital)

“We call him a mafia leader. This isn’t an attempt to humiliate him somehow. It is an important aspect of his self-identity which should be taken into account when you are negotiating with him,” Khodorkovsky says.  “For twenty-two years, after being in power and having aged significantly, he behaves like elderly bandits do. These elderly bandits, looking back at their terrible history, don’t think about remorse, they think about their mission. What did their whole lives lead them to? And Putin has chosen this mission. Maybe not the restoration of the Soviet Union, but the Russian Empire to some extent.”

Khodorkovsky thinks that Putin actually believes that Ukrainian President Volodymyr Zelenskyy promised he would cede some land to Russia and when that did not happen, Putin felt humiliated.

“Putin’s entourage, as we understand it, is a gangster milieu and the basis of Putin’s power is their fear. So, if his image is diminished, that fear goes away and accordingly his authority becomes at risk. He could not forgive the people of Ukraine,” Khodorkovsky says.

Russian President Vladimir Putin, left, meets with Chechen regional leader Ramzan Kadyrov in the Kremlin in Moscow. The leader of Chechnya says gay men do not exist in his republic and dismisses reports that 100 gay men have been rounded up, tortured and sometimes killed.
(Mikhail Klimentyev, Sputnik, Kremlin Pool Photo via AP, File)

Furthermore, Khodorkovsky believes that Putin is being urged by forces more extreme and militant than he is, like the Chechen leader Ramzan Kadyrov and Yevgeny Prigozhin the man who runs the infamous Wagner mercenary group and who has recently been seen making the rounds of Russia’s prisons to recruit killers for war effort.

The time may have passed for optimizing that knowledge he has gathered, having gone from the highest of high to the lowest of low, living in the company of criminals for a decade before building a life in the West. When asked about Putin’s next steps, Khodorkovsky said he believes the Russian president may actually have been led to believe by advisors that his military draft is going well and will change the course of the war. However, Khodorkovsky says if Ukraine does not basically win within the next few months, come the new year, “Putin will begin to think seriously about nuclear weapons.”

Khodorkovsky goes on, “what I’m trying to explain to people here in the West, what I’d like them to understand, is that Hitler didn’t use chemical weapons because he didn’t have time. And Putin will not use nuclear weapons if he runs out of time.”

Amy Kellogg currently serves as a correspondent based in Milan. She joined FOX News Channel (FNC) in 1999 as a Moscow-based correspondent. Follow her on Twitter: @amykelloggfox