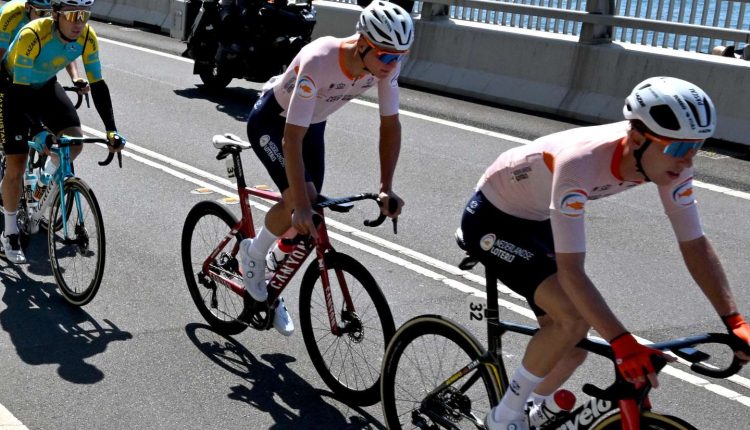 The bad movie in which Mathieu Van der Poel found himself as the main actor is about to end. Monday, September 26, the Dutch cyclist was allowed to return to Europe, after pleading guilty in Australian courts to assaulting two teenage girls, on the night of Saturday to Sunday. He was ordered to pay fines of 1,000 and 500 Australian dollars (about 1,010 euros in total).

Ryamond Poulidor’s grandson was in New South Wales to participate in the Road Cycling Worlds road race on Sunday in Wollongong. He got off to the start of the main event of the discipline, of which he was one of the big favourites, but dismounted after only about thirty kilometers, exhausted and exhausted. “mentally destroyed”.

Read also: Cycling Worlds: van der Poel, one of the favorites, gives up after a night at the police station

Because the 27-year-old runner had spent a good part of the previous night in a police station after an altercation with two young girls in the establishment where the Netherlands team was staying. “Around 10.40pm on Saturday a man was involved in a verbal altercation with two teenage girls aged 13 and 14 at a hotel in Brighton-Le-Sandshad then reported the police, without mentioning the name of the Dutchman. According to the alleged facts, he pushed the two teenagers, one falling to the ground and the other being thrown against a wall, causing a small scratch on her elbow. »

“Mathieu went to bed at 9 p.m. and at midnight there was still noise, had declared for his part to the press, Christoph Roodhooft the manager of Alpecin-Deceuninck, the professional team of Van der Poel. Children were playing in the hallway and knocking on his door. He came out to tell them to stop, but obviously not in the right way. » Returned to his room “at four o’clock in the morning” after being heard by the police, Van der Poel then did not sleep a wink all night.

At the start of the race in line, the rider did not deny the incident. “Yes it’s true, there was a little argument”he told reporters. “I wanted to go to bed early last night, but there were lots of kids in the hotel hallway who kept knocking on my door. After a while, I was fed up. I told them, in a not very sympathetic way, to stop. That’s when the police were called and took me away.” at the station, he continued.

Mathieu Van der Poel was initially summoned to court in Sutherland, a southern suburb of Sydney, on Tuesday. His passport, confiscated the day before by the authorities, was returned to him and the multiple cyclocross world champion will leave Australia on Monday evening.

The World with AFP (with AFP)