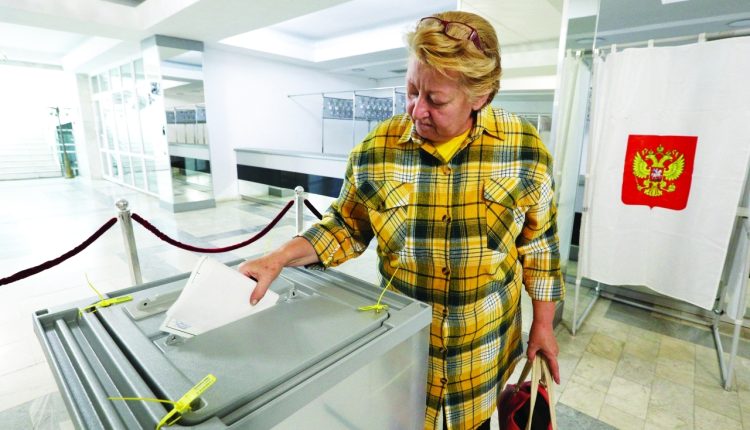 In a major development of the Ukrainian war, Russia-controlled areas of Ukraine held referendums yesterday on joining them, in a move condemned by Kyiv and its allies and considered illegal and an escalation of the conflict.

Referendums taking place in the Donetsk and Lugansk regions in eastern Ukraine, as well as in the regions of Kherson and Zaporizhia to the south, received widespread condemnation and considered them “false” by Kyiv’s allies. The referendums will continue for five days, and come in the wake of Russian President Vladimir Putin’s announcement this week of a partial mobilization that includes about 300,000 reservists, which in turn drew condemnation in Western countries.

For four days, officials are supposed to go to people’s homes to collect cards, then polling stations will open on the last day, that is, next Tuesday, for residents to cast their votes. The authorities also made it possible to vote in a building in Moscow representing the breakaway region of Donetsk.

In the regions of Zaporozhye and Kherson, the question was posed in the referendum paper as follows: “Do you support secession from Ukraine, turning the province into an independent state and joining Russia?” As for Donetsk and Lugansk, the question was formulated as follows: “Do you support joining Russia as one of the components of the Russian Federation?”

Commenting on the start of the referendum, Lugansk President Leonid Pasechnik said in an exclusive statement to Russia Today, “We have been waiting for this day for eight years. Through this referendum, we find calm, we find peace, and we return to the arms of the motherland,” he said. “He is happy,” Leonid, 59, a military official told AFP as he came to vote.

“At the end of the day, things are heading towards the return of the Soviet Union. And the referendum is a step to achieve that.” In turn, Denis Pushilin, the leader of the pro-Russian separatists in the Donetsk region, which is part of the Donbass industrial region, said in a message on Telegram that “Donbass is Russia.” “The vote of each of you will confirm the truth,” he added.

These referendums received widespread Western criticism, as US Secretary of State Anthony Blinken said during a Security Council session the day before yesterday, “We cannot … let President Putin get away” from accountability, denouncing the annexation referendums, considering them “false.”

He stressed that “the world order that we have gathered here to support is being destroyed before our eyes… (Defending Ukraine’s sovereignty) is about protecting a world order so that no country can redraw the borders of another by force.” Western capitals say the voting is sham and responded by imposing sanctions on Moscow. Ukrainian President Volodymyr Zelensky condemned the referendums as a “farce”, praising:

Western allies for their condemnation of it. In turn, China reiterated its commitment to respecting the sovereignty and territorial integrity of all countries, and called on all parties involved in the Ukraine conflict to resolve differences through dialogue and consultation.

Militarily, the Ukrainian army announced yesterday the recapture of a town from Russian forces in the Donetsk region in the east of the country.

“The Ukrainian army has taken Yatskivka back,” Oleksiy Gromov, an official in the Ukrainian Military Staff, told television.

Gromov said that “the Ukrainians also regained control of the positions south of Bakhmut,” the main city in the Donetsk region, which has been targeted for weeks by Russian attacks.

In addition, Russian Deputy Foreign Minister Sergei Ryabkov said that his country does not threaten anyone with nuclear weapons, but warns against interfering in the special military operation.

“We noted Washington’s jerky reaction to the instructions of Russian President Vladimir Putin to transfer the Russian deterrent forces to the special system of combat duty,” Ryabkov said during a seminar in Moscow yesterday. We make it clear that we do not threaten anyone with nuclear weapons, and the criteria for their use are enshrined in the military doctrine as defined by the document on the basis of Russia’s policy in the field of nuclear deterrence from June 2, 2020.”