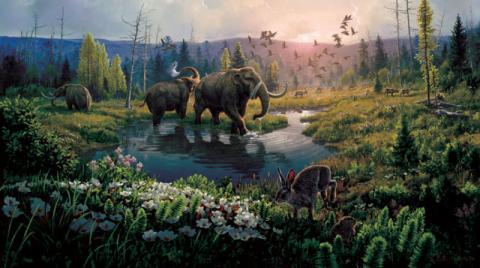 An imaginary illustration in Greenland two million years ago (A.B.)… In the frame, a two-million-year-old tree trunk (AFP)

The DNA of animals, plants and microbes dating back nearly two million years has revealed an amazing lost world at the northernmost point of Greenland, according to Reuters. The researchers extracted DNA from 41 samples of organic-rich sediments from five sites on the Berryland Peninsula, and identified more than 100 species of animals and plants. The samples were first extracted in 2006, but previous efforts to detect the DNA have been unsuccessful. The methods used to extract it have evolved since then, eventually allowing for this massive discovery.
The researchers announced the discovery of fragments of DNA from a group of animals including mastodons, reindeer, hares, lemmings and geese, as well as plants including poplar and birch trees, galls and microorganisms including bacteria and fungi. DNA is a self-replicating material that carries genetic information in living organisms.
Mastodon was a close relative of elephants and roamed North and Central America until its extinction along with many other large mammals in the Pleistocene nearly 10,000 years ago. The discovery shows that it lived in a much wider range than previously thought.
“The mastodon was a big surprise,” said Eske Fleslev, director of the Landbeck Foundation Geogenetics Center and head of the study published in the journal Nature. It has never been found in Greenland before. The biggest surprise was this unique ecosystem of polar and temperate (weather) types mixed together without a counterpart in modern times.
“I don’t think anyone would have expected Greenland to maintain this diversity of flora and fauna two million years ago at a time when the climate was very similar to what we expect to see in a few years’ time due to global warming,” added Fleslev, who works at the universities of Cambridge and Copenhagen.
And although ancient DNA is highly perishable, the study showed that under the right conditions, in this case permafrost, it could survive much longer than previously thought. Now, Fleslev said, he wouldn’t be surprised if DNA dating back at least four million years was found.