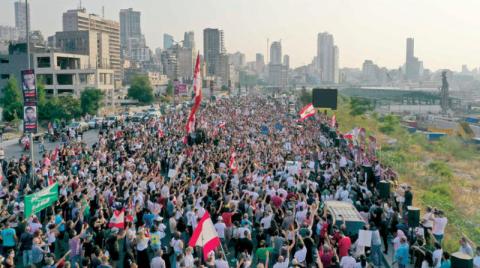 Accusations of “political corruption” exchanged between Mikati and Basil’s “stream”.

Hezbollah Secretary-General Hassan Nasrallah’s call, the judicial investigator in the Beirut port explosion file, Judge Tariq Al-Bitar, to step down, did not receive a judicial response, given that the judiciary views it as “a political call that does not obligate the responsible judge, and has no effect her on the investigation.”

Nasrallah had said in a speech the day before yesterday that “the most responsible for obstructing the investigation is the one who refuses to step down,” referring to Judge Al-Bitar. Nasrallah called for “a return to impartial judicial work, for the judicial process to be reopened, and for those responsible for this calamity to be held accountable.”

Nasrallah’s speech did not fall on deaf ears in the judicial corridors. A judicial source told Asharq Al-Awsat: “This is the position of a political man who does not obligate the judge responsible for the port file to anything,” stressing that “this position has no effect on the course of the investigation, which is conducted within strict secrecy, and under the reservation that keeps judicial procedures far removed from each other.” about the current conflicts in the country.

On the other hand, the political debate escalated yesterday between the Free Patriotic Movement, loyal to President Michel Aoun, and Prime Minister-designate Najib Mikati, as the Free Patriotic Movement launched a violent attack on Mikati in response to previous criticisms directed at him. Abuse of influence,” while Mikati replied that the “current” is deliberately blackmailing him politically.

While the movement’s statement said that Mikati’s history was “full of corruption,” the prime minister’s office responded: “People are in a valley and the current has turned the facts in a valley. Therefore, our response will be brief, and for the last time, to prevent further political blackmail and sterile debates, whose time is not The situation the country is going through in general, and the electricity sector in particular.”