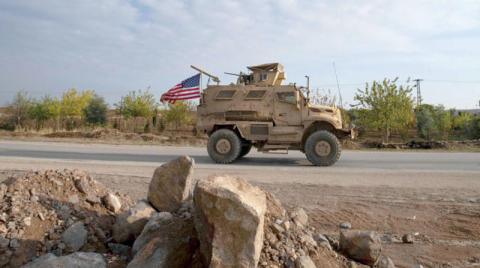 Turkey has affirmed that it will not abandon the completion of the security belt that it intends to establish on its southern borders, at a depth of 30 kilometers inside Syrian territory. This confirmation came at a time when the United States issued a new warning to Turkey against obstructing the operations of its forces and the Kurdish forces to combat the terrorist organization “ISIS” in Syria, in a position that reiterates the Americans’ refusal to threaten Ankara with a ground military operation against the sites of the “Syrian Democratic Forces” (SDF) that are dominated by them. The Kurds, in Manbij, Tal Rifaat and Ayn al-Arab (Kobani) in northern Syria.

Concurrently, Turkey confirmed yesterday that “there is a need to engage” with the Syrian regime, and reach a consensus between it and the “moderate opposition”, in light of information about Syrian President Bashar al-Assad’s refusal of “pressure” from Russian President Vladimir Putin to arrange a meeting with Turkish President Recep. Ok Erdogan.

Yesterday, Erdogan reiterated that his country “will definitely complete” the security strip it is building on its southern borders, at a depth of 30 kilometers. Erdogan said, during his participation in a mass event organized by the ruling Justice and Development Party to open a group of projects in the border state of Sanliurfa with Syria on Saturday, that the attacks that Turkey is exposed to (from inside Syria) “will not be able to dissuade it from achieving this goal (completing the security belt). )».

In the same context, Turkish Foreign Minister Mevlut Cavusoglu confirmed that his country needs to purge northern Syria of the Kurdish People’s Protection Units, the largest component of the SDF, as it did with ISIS. On the sidelines of his participation in the eighth edition of the Mediterranean Dialogue Forum held in the Italian capital, Rome, Cavusoglu said, “Just as we cleared northern Syria of ISIS, we need to continue our operations to cleanse the region of the PKK and its affiliates (the People’s Protection Units).”

Openness to the system

Regarding the efforts to rapprochement with the Assad regime and the normalization of relations between Ankara and Damascus, the Turkish foreign minister said that the effects of the war that has been going on in Syria for 11 years have affected everyone, adding that a consensus must be achieved between the moderate opposition, recognized by UN Security Council resolutions, and the regime. Cavusoglu added, “There is a need to engage with the regime as well so that the talks within the framework of the Constitutional Committee and the Astana formula are more constructive than they are today… This is also necessary in order to ensure the return of Syrian refugees to their country in a voluntary and dignified manner… It is not possible to send Syrians and other refugees in a forced way, but the return must be voluntary. He continued, “At the same time, we must cooperate in our war against terrorist organizations without any discrimination between them,” expressing his hope that “the Syrian regime will also understand that it is not possible to establish sustainable peace and stability in the country without consensus.”

He pointed out that terrorism is one of the biggest repercussions of the Syrian crisis, considering that the PKK, the Kurdish People’s Protection Units and the Syrian Democratic Forces (SDF) are all “one organization” whose leaders come from the Qandil Mountains in northern Iraq. He stressed that this “terrorist organization” directly affects Turkey, and over the last two years it has carried out about 2,000 terrorist attacks against it, killing about 300 citizens, in addition to the killing of Syrian civilians. He added that the organization “suppresses minorities” and also targets “Christian minorities… but Turkey’s European and Western friends, including the United States, turn a blind eye to that.”

Cavusoglu pointed out that the “PKK” seeks to divide countries, adding that when Turkey launched operations against it in Syria in 2019 (Operation Peace Spring in northeastern Syria in October 2019), the United States and Russia pledged to remove it from the Turkish border 30 Talk at least, but you did not fulfill the pledges you made to Turkey and “terrorists can still target Turkey and they continue to do so, so we need to continue our operations until we cleanse the region of terrorists and terrorist organizations.” He continued, “But at the same time, we are in contact with the Syrian regime at the intelligence level. Because the terrorist organization aims to divide the country, and this also affects Syria and the Syrian people.”

President Recep Tayyip Erdogan confirmed last week that things can return to normal with Syria in the next stage, as happened with Egypt, “there is no permanent rivalry in politics.” Russia is seeking to play the role of mediator between Erdogan and Assad in order to hold a meeting between them, although it believes that the ground for holding such a meeting has not yet been prepared. In this context, Reuters reported on Saturday, quoting 3 unnamed sources, that the Syrian regime is resisting Russian pressure, and that Assad refuses to meet Erdogan after Russian President Vladimir Putin suggested that, without revealing the date of the conversation that took place between them.

Reuters quoted two sources as saying that “Damascus believes that such a meeting may enhance Erdogan’s chances before the Turkish presidential elections next year, especially if it addresses Ankara’s goal of returning some of the 3.6 million Syrian refugees from Turkey.” The two sources added, “Damascus says: Why should we give Erdogan a free victory?… There will be no rapprochement before the elections… Syria also rejected the idea of ​​holding a meeting of foreign ministers.”

The third source, a diplomat familiar with the proposal, according to the agency, said that Syria considers such a meeting useless if it does not produce anything tangible, and what they have requested so far is the complete withdrawal of Turkish forces.

The agency also quoted Turkish sources as saying, “A meeting between Assad and Erdogan may be possible in the not-too-distant future… Putin is slowly paving the way for the meeting… It will be the beginning of a major change in Syria, and it will have very positive effects on Turkey… It will benefit.” Russia too, since it is intertwined in many fields.

At the same time, the United States reiterated its warning to Turkey against disrupting the operations of the American and Kurdish forces against ISIS in Syria, and at the same time expressed its understanding of Ankara’s security concerns. John Kirby, a spokesman for the National Security Council at the White House, said in remarks Friday night-Saturday that the Turkish bombardment of the Kurdish-controlled areas in northeastern Syria continues, in reference to the “claw-sword” operation that Turkey launched on the night of November 19 (November 19). The second) the past, against the background of a terrorist bombing that took place on Istiklal Street in Taksim district in Istanbul, which Ankara attributed to the “PKK” and the “People’s Protection Units” Kurdish allies of America in the war against “ISIS”. Kirby pointed out that there is no indication yet that Turkey will launch a ground military operation against the “SDF” in northern Syria. He said, “They continue to launch air raids… So far, there is no evidence of an imminent ground operation across the Turkish-Syrian border, where American forces are deployed alongside the Syrian Democratic Forces (SDF).”

Kirby added that Turkey has the right to defend itself, but the bombing operations carry serious risks. He explained, “We recognize their legitimate security concerns to defend themselves… What we do not want to see are operations in Syria that could cause civilian casualties again, that could cause casualties among our personnel, and that could distract the attention of our partners in (SDF). About a very real and necessary mission in place against ISIS… We don’t want to see anything that would affect our ability to maintain pressure on the extremist organization.” He added, “The strategic level of cooperation with the (Qasd) forces is not threatened, but the Turkish bombing against them means that the Kurdish forces will be less willing to continue contributing to confronting (ISIS) on a daily basis.”

A day after the “SDF” announced the cessation of coordination with the International Coalition for the war against “ISIS,” the US forces and “SDF” conducted a joint patrol, on Saturday, that roamed the areas of Rumailan and Qahtaniya in the countryside of Al-Hasakah Governorate, coinciding with the continuation of cautious calm in northeastern Syria, according to what he said. The Syrian Observatory for Human Rights. The Observatory pointed out that the international coalition forces, with the participation of the Joint Task Forces and Operation Inherent Resolve, conducted, on Friday, military exercises near the Al-Jawadiya area, east of Qamishli in the northern countryside of Al-Hasakah, during which heavy weapons and mortars were used, with the aim of knowing the extent of the crew’s efficiency and readiness, and to confirm the Its support for the “Qasd” in the region.

The international coalition forces also conducted military exercises at their base in the Koniko gas field in the countryside of Deir ez-Zor, which included parachuting from aircraft, for the first time, in addition to the use of heavy weapons. The regions of Deir ez-Zor witnessed the conduct of two patrols of the “international coalition” in partnership with the “SDF”, the first in the town of Al-Tayyana, and the second in the city of Al-Basira in the eastern countryside of Deir ez-Zor, coinciding with the flight of helicopters over the region.

On the other hand, military reinforcements of the regime forces arrived in the vicinity of the areas of the “Manbij Military Council” which is under the command of the “SDF” in the eastern countryside of Aleppo, without advancing towards the areas of contact with the Turkish forces and the pro-Ankara “Syrian National Army” factions. The reinforcements consist of more than 600 soldiers with their equipment and heavy machinery, including tanks and artillery, stationed in several villages surrounding the areas of the “Manbij Military Council” in the countryside of Aleppo, including Tal Aswad, Al-Tayha, Jab Makhzoum and the Khafsa area, south and west of Manbij.

The “Syrian Observatory” indicated that a Turkish march had bombed a site near the contact lines opposite the areas of “Peace Spring” east of Ain Issa, in conjunction with the flight of 6 helicopters of the Russian forces over a sector of the Aleppo-Latakia International Road (M4) from Sarrin base to areas of influence. Al-Bab Military Council, which is under the leadership of the SDF.

The Turkish Ministry of Defense said, in a statement on Saturday, that the Turkish special forces killed two members of the Kurdish “units” while trying to carry out an attack in the “Olive Branch” and “Peace Spring” areas in north and northeastern Syria.

A delegation of members of the Turkish Parliament’s National Defense Committee visited point zero on the border between Turkey and Syria in Hatay state, in the south of the country, on Saturday, at the invitation of Defense Minister Hulusi Akar, to inspect the situation in the region and the measures taken by the Turkish forces to confront any security threat to the country.