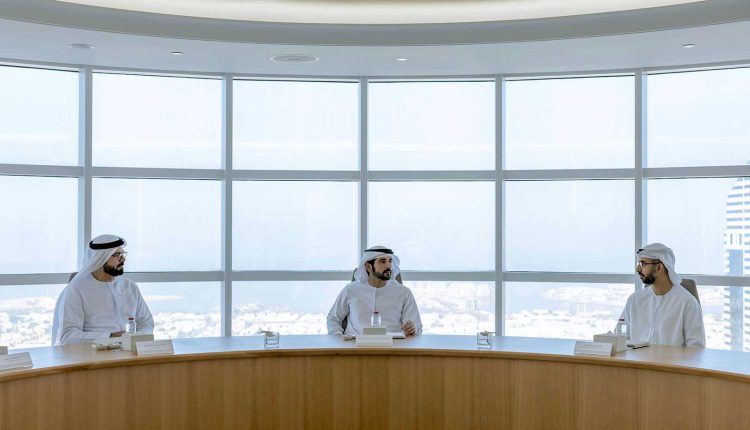 His Highness Sheikh Hamdan bin Mohammed bin Rashid Al Maktoum, Crown Prince of Dubai and Chairman of the Executive Council of the Emirate of Dubai, Chairman of the Supreme Committee for Future Technology and Digital Economy, confirmed that the proactive vision of His Highness Sheikh Mohammed bin Rashid Al Maktoum, Vice President and Prime Minister of the UAE and Ruler of Dubai, may God protect him Dubai has established itself as the capital of the digital economy, and a leading center for creating transformative business models and advanced technological concepts, employing and adopting them in various vital sectors that affect the lives of individuals..

This came during His Highness chairing the first meeting of the Supreme Committee for Future Technology and Digital Economy, which was formed as part of the efforts to implement the axes and objectives of the Dubai Metaverse Strategy, with the aim of drawing a road map to achieve the objectives of the strategy and formulating forward-looking plans and goals for investment in “Metaverse”, which enhances Dubai’s precedence in adopting technology. With the involvement of government agencies and the private sector.

His Highness said: “Dubai is proactive in developing a unique model in relying on new future technology and science that focuses on the digital world and metaverse, which will enter various vital sectors in the future, and will contribute to the advancement of societies, creating a promising digital future and ensuring the growth of the digital economy in the UAE.”“.

His Highness Sheikh Hamdan bin Mohammed added: “We are working today within the Supreme Committee to achieve the objectives of the Dubai Metaverse Strategy, to formulate an advanced digital future for the country, and to make Dubai’s economy one of the best leading economies in the world through digital economy projects, investing in the virtual metaverse world and digital fields, and anticipating the future of the digital world.”“.

During the meeting, His Highness Sheikh Hamdan bin Mohammed bin Rashid Al Maktoum approved the first phase of implementing the Dubai Metaverse strategy, and His Highness discussed mechanisms for defining work directions, and specific plans to start developing and studying the requirements of the strategy, preparing policies and directions in the field of digital economy, and creating a preliminary set of ideas to accelerate the pace Employing future technologies, including metaverse, artificial intelligence, blockchain, the new generation of the Internet (Web 3.0), virtual and augmented reality, the Internet of Things, data centers and cloud computing in the Emirate of Dubai.

During the meeting, the work roadmap was reviewed to achieve the objectives of the Dubai Metaverse Strategy, and the 100-day plan adopted by His Highness Sheikh Hamdan bin Mohammed, Chairman of the Supreme Committee for Future Technology and Digital Economy, aimed at coordinating work on the strategy by government agencies and ensuring their participation in enriching the field of digital economy and contributing to Developing new digital systems in various vital sectors.

His Highness also approved the start of 4 major initiatives aimed at using metaverse to provide government services by preparing a study for a new comprehensive system for government services that includes the expected positive results, the extent to which services are offered on metaverse platforms and benefited from by the community, ways of growth and improvement, and the submission of the study to the Executive Council in Dubai. The initiatives also aim to establish metaverse pioneers, provide training opportunities and develop national and distinguished competencies, build the largest metaverse community in Dubai that includes metaverse companies, startups, investors and platform users, and involve the private sector in strategic projects to activate metaverse technologies, and make Dubai a major center for organizing global events. And the local concerned with the world of metaverse.

Last July, His Highness Sheikh Hamdan bin Mohammed bin Rashid Al Maktoum launched the Dubai Metaverse Strategy, which aims to consolidate Dubai’s position among the top 10 cities in the leading economies in the field of “metavirus”. The strategy seeks to make Dubai a major center for the global “metavirus” community and to double the number of “blockchain” companies to five times the current number, after the emirate’s success in attracting 1,000 companies operating in blockchain and “metaverse” and supporting 40,000 virtual jobs that contribute to economic prosperity by 2030.