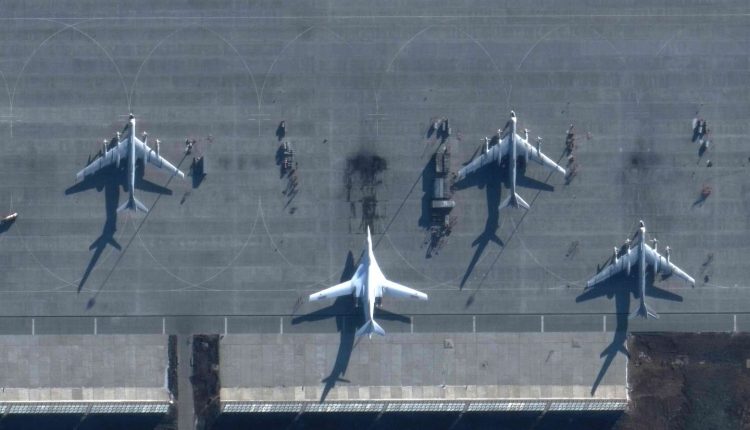 Ryazan, Saratov then Kursk. Since Monday, December 5, several Russian military airfields have been the target of attacks attributed to the Ukrainians. In a statement, the Russian Ministry of Defense wrote on Monday that “the kyiv regime tried to attack with Soviet-made drones the military airfields of Diagilevo, in the Ryazan region, and Engels, in the Saratov region, in order to disable the planes long-range Russians ». These attacks left at least three dead and four wounded among the Russian soldiers.

Engels-2 air base is in Saratov Oblast (about 500 km from Ukrainian territory) and Diagilevo Air Base is in Ryazan Oblast (about 460 km from Ukrainian territory). These two facilities house Russian strategic bombers, Tu-95 (turboprop) and Tu-160 (supersonic) at Engels 2; Tu-22M (supersonic) and Tu-95 at Diaguilevo. Since the start of the war, these devices have been used by Moscow to launch cruise missiles towards Ukraine.

So far, most Ukrainian attacks on Russian bases have been limited to targets close to Ukraine’s borders. On February 25, the day after the Russian attack, a short-range ballistic missile was fired at Millerovo airfield, in the Rostov region. In August, the Black Sea Fleet HQ in Sevastopol was targeted with a kamikaze drone. Monday, the Russian newspaper Kommersant wrote that Ukraine used Tu-141s to hit Engels base.

The Tu-141 “Strizh” (“swift”, in Russian) is not unknown. 14 meters long, this machine has a wingspan of around 4 meters and weighs just over six tonnes: pulled from a trailer, it has a range of around 1,000 km and flies at a speed of around 1,000 km /h, which seems compatible with videos posted on social networks. This reconnaissance drone of Soviet origin has been transformed into a cruise missile by Ukraine, which is the only country to still have copies.

March 10, one of them flew over Romanian and Hungarian airspace before crashing in Zagreb, Croatia. In June, the croatian weekly National wrote that the machine “belonged to the Ukrainian army and that it had a charge intended to explode on the Russian positions in Ukraine”. 1er December, the Croatian Defense Minister, Mario Banozicexplained that the Croatian authorities knew who had launched it but that the information remained “confidential”.

You have 45.22% of this article left to read. The following is for subscribers only.

It is expected that Dubai will remain…

Brazil sank an aircraft carrier in the…