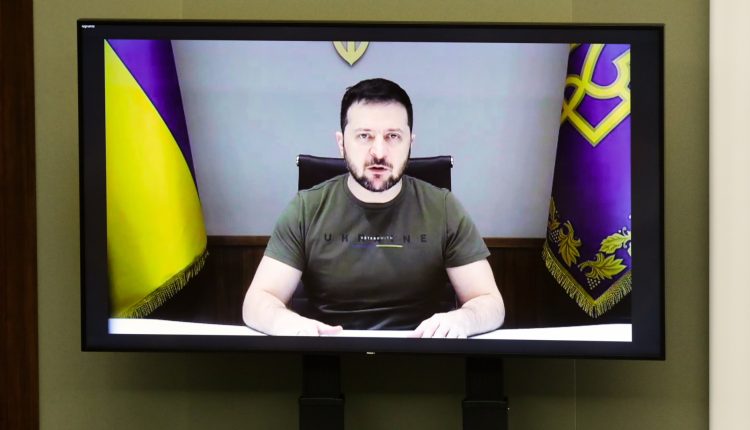 After nine months of war, Ukrainian President Zelenskyy called on the population to continue fighting together. His finance minister assumes that reconstruction costs will be far higher than before. All developments in the live blog.

Counties: We are reaching our limits as the number of refugees increases

The President of the German District Association (DLT), Reinhard Sager, has warned against overloading the districts in view of the renewed increase in the number of refugees from Ukraine. According to him, the districts will reach their limits in terms of their accommodation capacities. The number of refugees who have been housed centrally in emergency shelters such as tents or gymnasiums is already increasing, he told the editorial network Germany. “We have to assume that if the number of refugees continues to rise, tent cities will have to be erected again,” said the DLT President.

British Foreign Secretary James Cleverly has announced that he will continue to pledge millions of pounds of support for his planned visit to Ukraine. According to a statement from his office released early this morning, the funds will ensure the country gets the practical help it needs over the winter. “Britain stands with Ukraine and our support will continue until this remarkable country recovers,” said Cleverly. During his trip, the minister will also meet President Volodymyr Zelenskyy and Foreign Minister Dmytro Kuleba.

According to Ukrainian Finance Minister Serhiy Marchenko, Ukraine will need more financial support to rebuild the country. “Unfortunately, the number is growing every day and, in the worst case, will increase significantly,” Marchenko said in an email. The current budget provides little for reconstruction and needs to be increased if possible. In the past few days, a series of Russian attacks in Kyiv had caused major power outages. “The support of our international partners is of crucial importance for us,” says the minister, referring to the 18 billion euros already pledged by the EU.

Selenskyj conjures up the country’s spirit of resistance

Nine months after Russia’s war of aggression began, Ukrainian President Volodymyr Zelenskyy has invoked his country’s spirit of resistance. “We survived a full-scale war for nine months, and Russia didn’t find a way to break us. And it won’t find one,” said Zelenskyy in his daily video address in the evening. “We must carry on as we are right now, in unity and mutual aid.”

Zelenskyi said how difficult it was to restore electricity and water supplies after Wednesday’s heavy rocket attack. “Russia not only wants the Ukrainians to be without electricity and heat,” he said in Kyiv. “The terrorists want to isolate us from each other and make sure we don’t feel each other.”

Live blog from Thursday to read

Importance of Family Lawyers for…