Ukraine Ambassador Melnyk: Anything but diplomatic 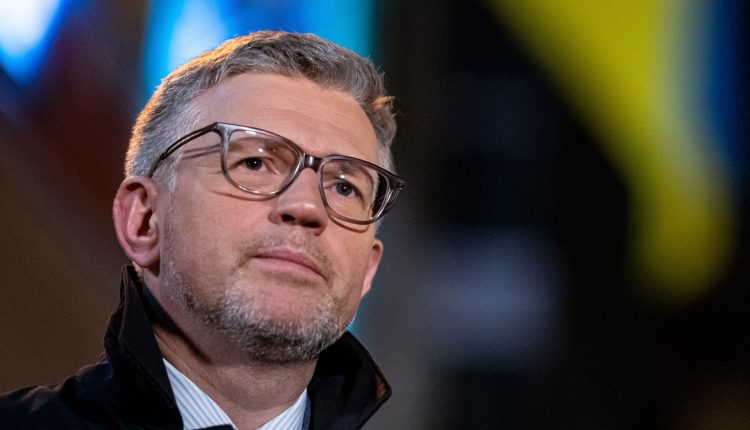 As Ukraine’s ambassador, Andriy Melnyk is anything but politely diplomatic. This is often uncomfortable for the federal government. He says what many in Eastern Europe think.

The war is ten hours old when Andriy Melnyk appears in front of the capital’s media cameras. Wearing a dark suit and dark tie, elegant as always, the Ukrainian ambassador talks about the events in his homeland: Russia has started a war of annihilation, tanks are rolling towards Kyiv from Belarus, and military aggression has the dimensions it has had since World War II World War no longer existed.

Melnyk speaks freely, with a soft accent. He couldn’t sleep much. His niece in Kyiv spent the night in an air raid shelter, which depresses him. His words make war seem close for a few moments in the embassy building in Berlin not far from Friedrichstrasse. As soon as you enter, it conveys an atmosphere as if you were in Kyiv, 1200 kilometers away.

The ambassador warns that Russia has also declared war on Europe. A wave of refugees is imminent. As in the weeks before, he calls for a stop to Nord Stream II and arms deliveries. The federal government must persuade Putin to stop the “madness”.

During these hours, the first people lay flowers and candles in front of the building. Federal Minister of Economics Robert Habeck comes to the embassy for a talk, while thousands in front of the Federal Chancellery are calling on the federal government to finally move. Three days later, Chancellor Olaf Scholz heralds a turning point in German foreign policy in the Bundestag. Melnyk is greeted with prolonged applause in the grandstand.

Gauck hugs Melnyk on the spectator stand of the Bundestag.

In the middle of the war, he remains the tireless admonisher, speaking to the Germans’ conscience, whether it’s about weapons, a no-fly zone over Ukraine, or stopping oil and gas supplies from Russia.

Since the beginning of the war he has met with more understanding. But after the initial shock of the Russian war of aggression, those who want to accommodate Putin are again speaking out. Some experts are calling for an end to the war through the surrender of Ukraine – without considering what the people there want.

However, with his not at all diplomatic and elegant way of making accusations against high-ranking politicians and sometimes using strong language, he has been met with resentment in Berlin for a long time.

He made serious accusations against Federal President Frank-Walter Steinmeier in February when he defended Nord Stream II as “almost the last bridge between Russia and Europe”. Melnyk called it “cynical” that the Federal President referred to the “bigger picture” of Germany’s guilt in World War II. The Ukrainian sharply criticized Steinmeier for equating Russia with the Soviet Union. The immeasurable suffering of other peoples of the USSR is completely ignored.

He also addressed the Federal Chancellor. The fact that Scholz has so far refused to stop supplying energy sources from Russia is a “knife in Ukraine’s back,” Melnyk told the “Welt”. A few days later, an SPD politician lost his temper. “I now find this ‘ambassador’ unbearable,” wrote Sören Bartol, State Secretary in the Ministry of Construction, in a tweet on March 16. However, he later deleted it and apologized.

Melnyk provides arguments to his opponents with statements about the Azov regiment. The right-wing extremist movement was formed during the war in eastern Ukraine that began in 2014. The political arm has ties to far-right extremists in Europe. The military part was incorporated into the National Guard and reports to the Interior Ministry in Kyiv. The UN human rights organization OHCHR accuses the Azov regiment of human rights violations. It is also involved in the recent battle for Mariupol, but with around 2,000 men it is only a small part of the Ukrainian forces.

Above all, Melnyk sees that Russian propaganda uses the Azov regiment as a “fake narrative” of the “denazification” of Ukraine, which is used to justify the “war of annihilation against women and children in Mariupol.” A differentiated confrontation with a nationalism between right-wing extremism and the will to assert oneself and to survive is difficult to lead in this situation.

This is also true of the controversial historical figure Stepan Bandera. Melnyk laid flowers at the Ukrainian nationalist’s grave in Munich in 2015. During the Second World War, Bandera temporarily collaborated with the Wehrmacht. But later he was a prisoner in the Sachsenhausen concentration camp and was finally murdered by the KGB. In this case, too, the current situation leaves little room for differentiation and acknowledgment of failures in dealing with the Second World War – on both sides.

Melnyk himself experienced the last years of the Soviet Union as a child. The 46-year-old grew up in an academic household in Lviv, western Ukraine, and was given the opportunity to study international relations at the University of Lviv after reunification. The stations of his diplomatic career include the Ukrainian consulate in Hamburg and the embassy in Vienna. After positions in the government in Kyiv, he came to Germany as ambassador in 2014 – the year in which the war in eastern Ukraine began.

When he speaks of Europe being defended in Ukraine, he echoes the view of many in his homeland and in Russia’s neighborhood. Members of the Ukrainian parliament, for example, also warned of Putin in talks. Something similar could be heard in Estonia, Georgia and Sweden.

“German political elite lives in their own world”

The Ukrainian journalist Denis Trubetskoy, who writes for the German media from Kyiv, sees Melnyk in a row with the comparatively young Foreign Minister Dmytro Kuleba: “He also speaks very clearly and always told the G7 ambassadors clearly when he was dissatisfied with something or In his opinion, they interfered too much in the internal affairs of Ukraine.”

Basically, he thinks that’s a good thing, says Trubetskoy. The journalist was “a bit skeptical” about Melnyk’s tone and his clear announcements to the Germans. But in the end, Melnyk was often right, even with his constant demands for arms deliveries. Trubetskoy recalls the much-criticized Bundestag session after President Volodymyr Zelenskyj’s speech and says: Under the current circumstances, he doesn’t find it that bad that the German political elite is angry with him. “She still lives in her own world and will be able to endure it, especially since many of his points are basically correct.”

In his country’s struggle for survival, Melnyk pays no attention to personal sympathy. In addition to the Russian tanks and rockets in his country, he also sees the propaganda machinery of the Kremlin, whose international representatives, from the UN ambassador in New York to Foreign Minister Sergey Lavrov, not only appear arrogant, but also spread lies to justify the war of aggression.