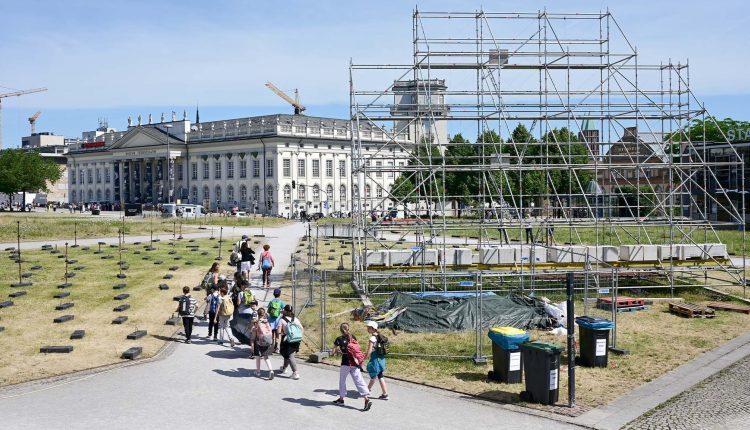 documenta 15 doesn’t make the headlines. The previous chairman of the documenta forum has resigned. He had criticized the dismantling of the controversial artwork by Taring Padi. Meanwhile, the Ruangrupa curatorial team apologized publicly for the first time.

The curatorial collective Ruangrupa has apologized for the anti-Semitic motifs on the work “People’s Justice”. “We all failed to discover the anti-Semitic figures in the work,” the collective wrote in a statement on the documenta website on Thursday 15. “It’s our fault. We apologize for the disappointment, shame, frustration, betrayal and shock we have caused to viewers.”

Such a statement by the Indonesian curators of the world art show had been expected for days. The collective continues to write that it “now completely understands” that the pictures seamlessly connect to the worst period in German history, in which Jews were persecuted and murdered on a hitherto unimaginable scale.

“It is a shock not only but specifically for the Jewish community in Kassel and throughout Germany, whom we consider our allies and who to this day live under the trauma of the past, experience discrimination, prejudice and marginalization.” The curators wish to continue the dialogue that has begun and to learn about the history of anti-Semitism.

The World Art Show had previously made further negative headlines. After an interview, the documenta forum distanced itself from its previous chairman. Jörg Sperling then resigned with immediate effect. In an interview with the dpa news agency, he criticized the fact that Taring Padi’s work of art, which was perceived as anti-Semitic, was taken down at the Kassel art exhibition “due to political pressure”. “A free world has to endure that,” said Sperling.

The documenta forum announced that it expressly regrets Sperling’s statements. They only correspond to the “personal, unauthorized opinion of Jörg Sperling”. The interview had not been coordinated with the other board members; the other members of the board considered “image representations in the manner of ‘Stürmer’ to be absolutely unacceptable”.

In our ticker we inform you about current topics from the cultural scene in Hesse.

“That sharpens the positions”

Jörg Sperling confirmed his resignation communicated by the forum. He stands by his statements, he said on Thursday. He personally received a lot of positive feedback. He was “not unhappy” about his departure, just as little as he was about the debate it triggered: “It sharpens the positions.”

The documenta-Forum was founded in 1972 by Arnold Bode as a support association for the documenta. According to its own statements, it supports the documenta idea and all institutions and objects associated with the documenta.

Minister of State for Culture Claudia Roth (Greens) has meanwhile called for consequences for the structure of the art exhibition. Basically, the federal government wants more influence on the documenta. A five-point plan deals with processing and consequences.

“The responsibilities between the management and the curators in particular as well as the chairman of the supervisory board and the committees must be clearly clarified and consequences must be drawn from this,” it says. Concrete demands for withdrawal are not made.

Jewish community complains about the effects

Meanwhile, the Jewish community in Kassel drew attention to the concrete effects of the debate. Anti-Israel slogans are now being shouted on Kassel’s Friedrichsplatz and students of other religions are staying away from the events in a Jewish center, the community announced together with the Sara Nussbaum Center for Jewish Life in Kassel on Thursday.

The community emphasized that anti-Semitism is “in no sense a condition of Jews, but an everyday reality. It’s not about ‘negative feelings’, it’s about our security in Germany.”

A work called “People’s Justice” by the Indonesian artist collective Taring Padi caused a wave of outrage because of its anti-Semitic imagery. Those responsible for the documenta initially decided to cover the work with black panels of fabric. It was completely dismantled on Tuesday evening.

Anti-Semitism at the documenta: how could that happen?

The documenta has a tangible anti-Semitism scandal. After months of fending off debates and protestations that there is no anti-Semitism anywhere, Ruangrupa and the documenta are in a shambles. That could have been avoided.