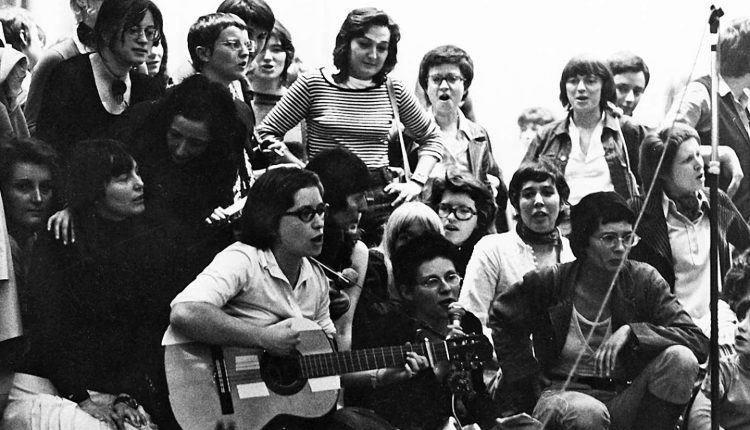 That night, the party was cut short. On August 26, 1970, nine feminist activists decided to lay a wreath under the Arc de Triomphe in homage to the wife of the Unknown Soldier. A way to show their support for the great national strike for women’s rights organized the same day in the United States by the Women’s Liberation Movement, on the occasion of the fiftieth anniversary of the ratification of the right to vote for American women.

Here they are disembarking in the center of the Place de l’Etoile, banners flocked with slogans such as “solidarity with the women on strike in the USA”, “there is even more unknown than the Unknown Soldier, his wife” or “a man on two is a woman”. But the gendarmes are also there: they repel the demonstrators and take them to the station. The bouquet will never be deposited.

This somewhat messy happening would later be considered the founding act of the Women’s Liberation Movement (MLF). Among its initiators: the novelist and essayist Monique Wittig, the writer Cathy Bernheim, the sociologist Christine Delphy or the American academic Margaret Stephenson. We often ignore it, but these women will co-found eight months later Les Gouines Rouges, the first lesbian group created in France.

One could see an omen in these facetious banners repacked before they were even truly unfolded. Unknown to the general public, neglected by intellectuals, this iconoclastic and joyful adventure which lasted from 1971 to 1973 nevertheless marked a giant step in the visibility of French lesbians.

“People can’t imagine how happy we were to meet again…” Seated on a terrace in the Latin Quarter, Marie-Jo Bonnet, 73, greedily hums a few songs invented by the Gouines Rouges. Author of one of the first theses on the history of women (Romantic relationships between women. XVIe-XXe century, Odile Jacob, 2001), the historian evokes this group of which she was a member: “Les Gouines Rouges is the entry of the possible into the real. That we dared to call ourselves that when we had just come out of hiding is extraordinary. »

The Gouines Rouges adventure began for Marie-Jo Bonnet in the MLF, which she joined in 1971. As a baptism of fire, she chose to participate in the boycott of an anti-abortion conference given at the Catholic Institute in Paris. She still remembers the smell of the waxed parquet which reminds her of her years at boarding school at Notre-Dame d’Orbec, in Normandy. As if his past and his future collided.

You have 85.44% of this article left to read. The following is for subscribers only.

In Haarlem, the Netherlands, the MSD factory floods the world with its drugs