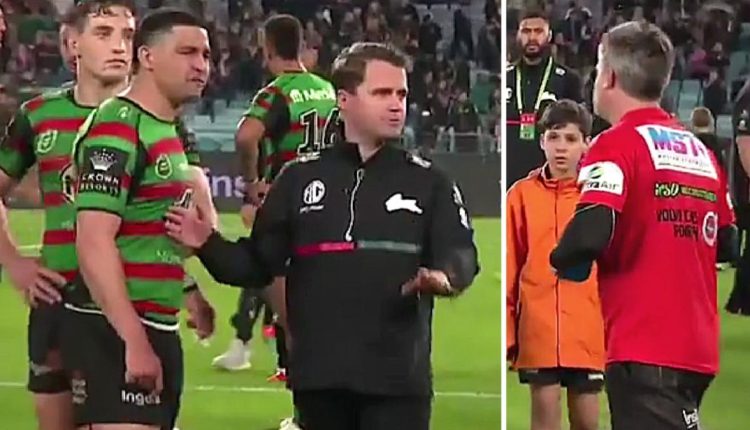 Penrith fullback Dylan Edwards insists South Sydney’s bust-up with Panthers trainer Peter Green was a misunderstanding, and that there was no sledge directed at the Rabbitohs’ Jed Cartwright.

Green has found himself in the headlines for a second straight finals series, after being involved in a heated altercation with Souths’ Cody Walker following Saturday night’s NRL preliminary final.

The issue is reported to have centred around a comment made late in the game, which Cartwright took to be about an old back injury from his time at the Panthers.

The claim of a sledge came after Cartwright had put a heavy hit on Edwards, as the Panthers inched closer to their 32-12 win.

It prompted Cartwright’s father, Penrith club legend John Cartwright, to call for Green to be banned for life for being a “coward”.

But Edwards maintained on Tuesday no such comment had been directed at Cartwright, and Green was instead speaking to him.

“He was talking to me. I was in the tackle and Jed put a good shot on me and (Green) goes, ‘Righto Dyl, let him have that one’,” Edwards said.

“It was honestly at me. He said nothing about Jed’s injury, or anything like that.

“It might have got misheard. It was to me and seeing how I was and seeing if I pulled up alright after getting tackled pretty hard by him.”

Edwards said Penrith players had joked with Green about again becoming the centre of attention, after the trainer copped a two-game ban during last year’s finals.

In that instance, Green earned the ire of the NRL for illegally stopping play with Parramatta on the attack late in last year’s semi-final.

The Panthers were adamant at the time Green had done nothing wrong and had followed correct procedure, however he was still handed a two-game ban.

There will be no ban this time around, with the Panthers physio back at training on Tuesday and free to wear the orange shirt in Sunday’s grand final against the Eels.

“We were just having a joke about that,” Edwards said.

“But it’s unfortunate. I didn’t see the altercation with Cody Walker and Greeny after the game, but it was always going to blow up after the game.

“He looks after us, he is so good. I can’t back him enough.

“He didn’t say anything untoward, honestly. It’s just been misheard and taken out of context.”