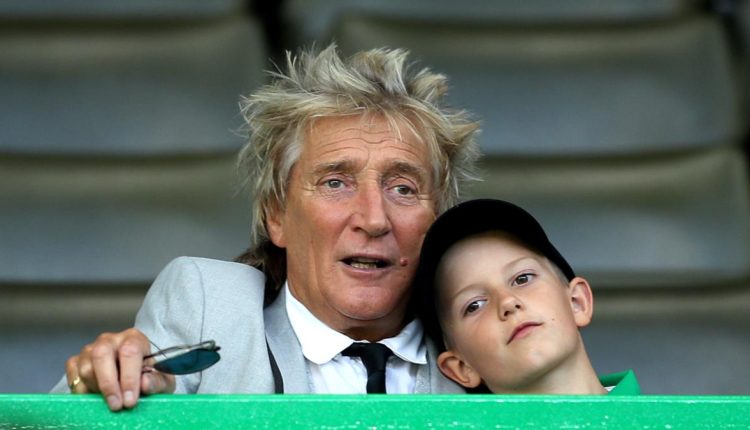 Singer Rod Stewart has been embroiled in a terrifying health scare involving his 11-year-old son.

The 77-year-old music legend revealed that his son Aiden had to be rushed to hospital after “going blue and unconscious” at a football game.

The rocker’s son was playing with the Young Hoops Under 12s – for young fans of Celtic FC – when the scary moment unfolded.

“We thought my boy had a heart attack,” Stewart told the football news site FourFourTwo.

“He was going blue and unconscious until he calmed down.

“It was scary, but it turned out to be a panic attack.

“The lad wanted to do well, pulled on the Hoops in Scotland for his Dad.”

Stewart did not reveal when the terrifying incident happened but said his son’s panic attack was not the only medical incident to unfold at the game.

“Another boy fell backwards and banged his head,” Stewart said.

“In all of my days watching football, that’s the only time two ambulances had been called.”

The Tonight’s The Night singer has eight children to five different women.

Aiden and Alastair, 17, are his sons by wife Penny Lancaster, whom he married in 2007.

Speaking with PEOPLE magazine in 2021, Stewart explained how he parented his big brood.

“I have to be several different fathers because of the different age groups of my kids,” he said.

“For instance, my 15-year-old is dating girls, so I had to give him a sex lesson.

“I just told him what he should and shouldn’t do, but he’s on top of it.

He said all of his older children went through their “bad period” of drinking and “dabbling” in drugs.

“Except for Liam, I don’t think he ever did, but they all came out the other side,” Stewart said.

“As a dad, I’ve learned to listen and not blow my top.”

The rocker, who was knighted in 2016, has had his own health scares over the years.

In 2000, doctors found a cancerous lump on his thyroid gland – and Stewart was faced with the prospect of never being able to sing again.

At the time, Stewart said it was a “terrible shock.”

“I was clearly as fit as a butcher’s dog, working out every day, doing shows, still playing weekend football at the age of 55,” he wrote for the Daily Mail UK.

“That piece of news will really do it to you.

“When the initial numbness had worn off, I felt fearful, vulnerable to a degree that I never had before.”

Stewart went into surgery to have the lump removed two days after getting his biopsy results.

He didn’t require any chemotherapy, but the bigger struggle was getting his voice back.

“I knew going into the operation it might be difficult coming back because they cut all the way through my neck,” he said.

“It took me nine months, and I’d start off singing, ‘Wake up Maggie’, and I got something and then a little bit more every day.

“But it took me nine months to get my voice back.”

The singer revealed he had been given the all-clear after secretly battling the cancer for three years.