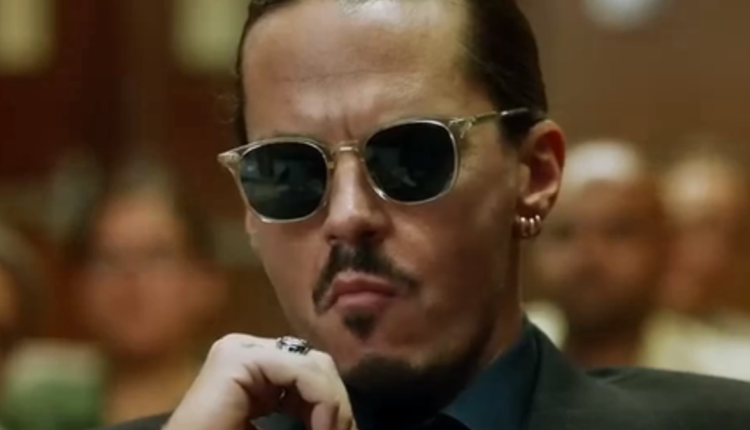 And it hasn’t taken long for the first movie about the sensational trial to be made – just four months, in fact.

The first trailer for the film shows each actor mirroring the exact outfits worn by their real-life counterparts during the trial.

Anyone who watched, or read about, the trial in any detail will recognise signature moments being referenced.

One scene shows Depp famously doodling cartoons during the trial.

In another scene Depp gets jealous over Heard’s friendship with fellow actor James Franco.

One moment shows the fan and media circus surrounding the trial, with Depp fans crowding outside the front of the courtroom as a reporter speaks to camera.

“It’s day one of the Depp vs Heard defamation trial,” the reporter says.

“Though fans are showing support for both sides, there’s clearly a favourite here.”

A seven-person jury found Heard had intentionally and maliciously defamed Depp when she wrote a 2018 opinion piece for The Washington Post describing herself as a public figure representing domestic abuse.

The six-week-trial was followed by fans around the world, with every detail and moment being pored over.

There was never any doubt the drama would eventually be made into a movie.

“Hot Take: The Depp/Heard Trial has ‘Hot Take’ in the title for a reason,” Tubi’s chief content officer Adam Lewinson said in a recent statement.

“With our partners at MarVista, this Tubi Original was fast-tracked into production to capture a timely take on a story that became part of the cultural zeitgeist, painting a unique picture of what millions watched play out in the headlines over the (US) summer.”

Reactions were mixed when the trailer for the new film was posted to YouTube.

“C’mon, we have all just seen the original less than 6 months ago, who needs a remake?” one viewer asked.

“The movie nobody thought they needed and… they’d be right,” joked another.

But other viewers thought it had potential.

“Say whatever you want about this but that guy nailed Johnny’s voice,” one person remarked.

“Still better acting than what Amber could manage when testifying,” deadpanned another.

Others couldn’t get over the fact that the actors share little resemblance to Depp or Heard.

“It’s like they were trying to find the actors who look nothing like him and her,” one person wrote.

“Say what you want, but I am so watching it. Missing the needed drama!,” added another.

The film is due out on Tubi on September 30.