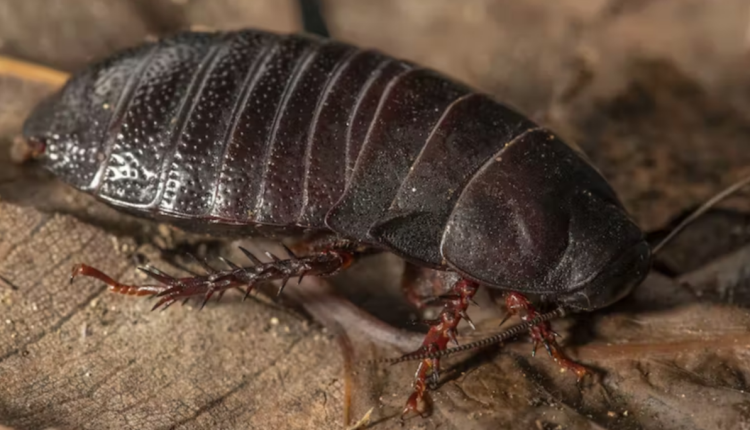 This article first appeared in The Conversation.

In 1887, Australian Museum scientists undertook a pioneering expedition to Lord Howe Island, a tiny patch of land off the east coast of Australia. Among their many discoveries, they recorded “a large Blatta” – a type of cockroach – under a decaying log.

This was later described as Panesthia lata, the Lord Howe Island wood-feeding cockroach.

P. lata was noted as being highly abundant, playing a key role in nutrient recycling, and presumably a food source for the many birds on the island. Alas, in 1918 rats arrived on the island from a shipwreck.

By the late 20th century, P. lata could not be found despite extensive searches over multiple decades and was assumed to have gone extinct due to rat predation.

But could it have survived in some unexplored pocket of the island?

Putting the cockroach back where it belongs

In 2019, the New South Wales Department of Planning and Environment (NSW DPE) implemented the final stage of its highly successful (although at times controversial) rat eradication program on the island.

Following this, I and my colleagues from NSW DPE, Lord Howe Island Museum, Chau Chak Wing Museum, CSIRO’s Australian National Insect Collection and the University of Melbourne became interested in the biology of P. lata and the potential to repopulate the island with this insect.

This was on the cards because in 2001, P. lata had been discovered on Blackburn and Roach islands, two small islands near Lord Howe Island.

But hang on a minute: why would we want to put cockroaches, one of the most reviled creatures on Earth, back on a beautiful island after their seemingly fortuitous extermination?

Well, P. lata is, believe it or not, quite cute and charismatic, and has no interest in going into people’s houses.

It is wingless, about 4cm long, and stays hidden in the forest, where it burrows into the soil and feeds on leaf litter and rotting wood by night.

In July we received funding from the Australia Pacific Science Foundation to investigate the genetics and ecology of P. lata from Blackburn and Roach Islands.

So Maxim Adams, an honours student in our lab at the University of Sydney, and Nicholas Carlile from NSW DPE headed off to Lord Howe Island to begin the study.

Bad weather prevented them from going out to Blackburn Island, so they decided to examine potential sites on Lord Howe Island that might have once been teeming with P. lata before the rats arrived.

They walked to a secluded area in the north of the island and decided to turn over a few rocks. Literally the first rock they checked revealed a small congregation of the cockroaches!

I was due to join them three days later, but they called me that afternoon with great excitement to relay the news.

They found a few others within a few metres under the same fig tree, but extensive searching over the next few days revealed none in other nearby areas or other parts of the island.

Not the same as their neighbours

We carried out some preliminary DNA tests upon our return to Sydney, finding the rediscovered Lord Howe Island population of cockroaches was distinct from the ones found on Blackburn and Roach islands.

It is possible the population hung on as a result of rodent baiting in the area. The baiting was done in recent decades to assist the survival of various other threatened species.

We are now carrying out more extensive DNA studies, including historical museum samples collected from the late 19th and early 20th centuries, and samples from Ball’s Pyramid, roughly 20km southeast of Lord Howe Island, collected by Dick Smith in the 1960s.

Through these studies, we hope to determine the relationship of the rediscovered population with those originally collected on the island a century or more ago and those on the outer islands. We also hope to uncover the origins and evolutionary history of P. lata.

The Lord Howe Island Group is a UNESCO world heritage site of global natural significance and is home to more than 100 plant species found nowhere else on Earth, and many more endemic animal species. The biology of many of these species, particularly the island’s invertebrates, remains mysterious.

We hope our use of DNA techniques will help us to establish P. lata as a model for understanding several million years of evolution on the Lord Howe Island archipelago, and aid the re-establishment of this shy yet charismatic creature on its homeland.