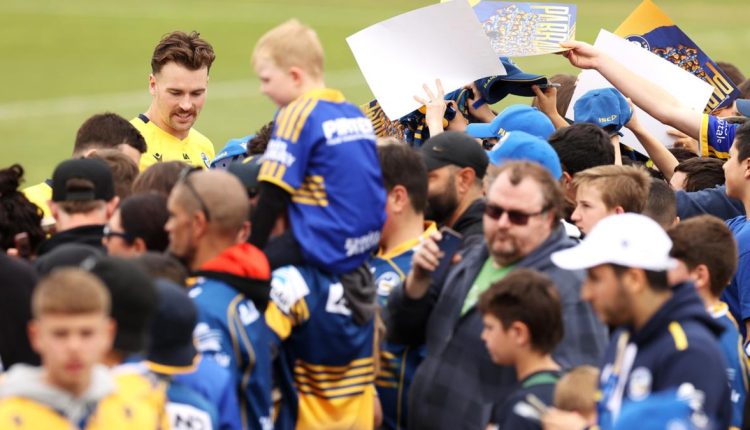 Parramatta back-rower Isaiah Papali’i reckons the Eels’ training sessions are usually watched by one man and a dog.

So when 3000 or so fans rocked up to their Kellyville training base on Monday, the Kiwi international was taken aback.

“It’s usually just the hardcore supporters who come but I’ve never seen anything like this,” Papali’i said.

“I’m soaking this in and I know those fans have been waiting for another opportunity.”

The Eels haven’t been in a NRL grand final since 2009 and the excitement among their fanbase ahead of Sunday’s clash with neighbours and defending premiers Penrith is palpable.

They ran out of sausage sizzle by 11am and the perimeter fence twice collapsed as supporters hopeful of ending a 36-year title drought got signatures and selfies with their favourite players.

Fans arrived in jerseys new and old, and one – Laiakini Tikoibau – parked his customised blue and gold Mustang on the driveway and revved the engine as the Eels trained in front of them.

“They (Mustangs) are white or black, so my younger son said, ‘Dad, we go for Parramatta, so why don’t you go for yellow?’,” Tikoibau said.

“I put on yellow but I looked at it one day when I came back from an Eels game and I said, ‘it still doesn’t look right’.”

When winger Maika Sivo was whisked away to conduct interviews the supporters let out a collective groan of disappointment.

As they waited for him to return to signing autographs, the fans burst into a spontaneous chant of “Sivo, Sivo, Sivo” as if he had already scored the winning try in the grand final.

The Fijian star doesn’t remember the last time the Eels made the grand final and probably hadn’t even heard of rugby league when Parramatta surged into the 2009 grand final.

He was there as a “heartbroken” supporter when the Eels lost to Melbourne 13 years ago and knows how this success-starved fanbase can carry them on Sunday.

If they ran out of sausages on Monday, imagine the shortage of beer in the west if they claim the premiership on Sunday.

From spoon to grand final: Ex-butcher wants to leave a champ after epic prelim