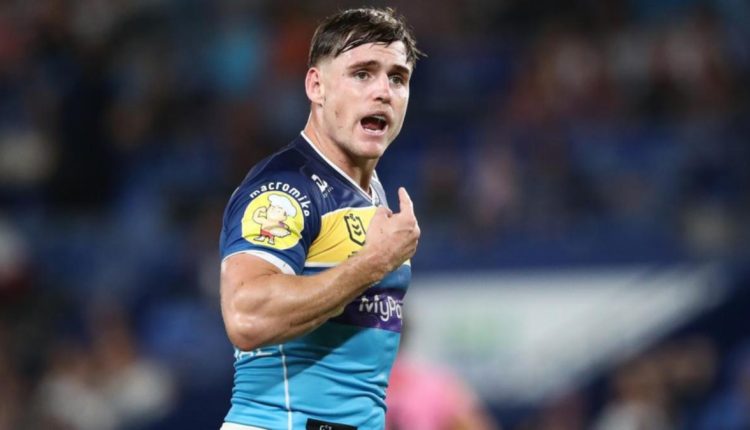 Gold Coast star AJ Brimson has vowed to prove his worth as an NRL five-eighth despite the impending arrival of Kieran Foran at the Titans.

The experienced New Zealand international will join the Titans next year on a two-season deal which has put a question mark over coach Justin Holbrook’s long-term commitment to having Brimson, halfback Toby Sexton and fullback Jayden Campbell as his first-choice spine.

The trio combined for just the third time this season in last weekend’s Magic Round golden-point win over St George Illawarra, 23-year-old Brimson returning to the No.6 jersey after playing fullback the two weeks beforehand.

Brimson said he could only see upsides for himself and the club from Foran’s arrival.

“Honestly? I’m excited. It’ll be good to learn off him,” Brimson said.

“I’ll worry about where everyone’s going to fit next year when he comes but obviously this season comes first.

“Every time I play I want to make the jersey my own whether it’s fullback or six or wherever it is. Pretty confident in my own ability and I’m excited he’s coming to the club.”

While the nail-biting win over the Dragons snapped a five-game losing run, the Titans are still a lowly 13th on the ladder with just three wins from 10 games in 2022.

Closing the gap on the seventh-placed Sharks will be a crucial step in ensuring Gold Coast can position themselves for a charge towards the top eight in the back half of the season.

“Coming off a loss last week so they’re going to be pretty hungry but we’re looking forward to it, back at home, four o’ clock on a Sunday so it’ll be good.”

Titans coach Justin Holbrook has stuck with the same 17 which beat the Dragons while the Sharks have moved captain Nicho Hynes back to halfback after playing at fullback in last week’s loss to Canberra.

Rugby sevens convert Lachlan Miller will make his NRL debut in the Sharks’ No.1 jersey with Hynes replacing Braydon Trindall in the halves alongside Matt Moylan.