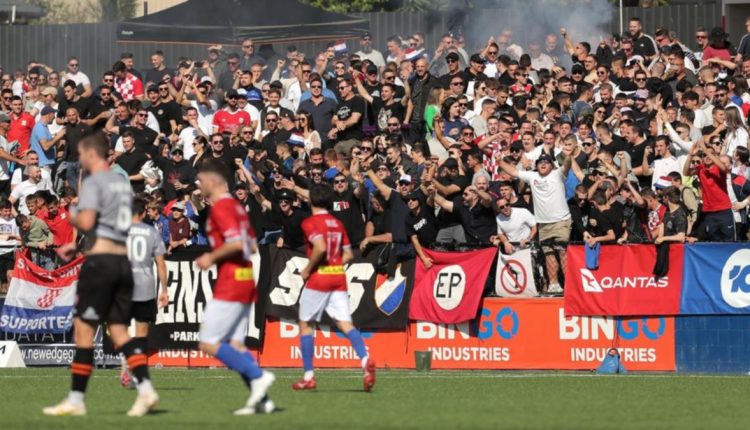 A second Sydney United 58 fan caught performing “a fascist salute or similar gesture” during the Australia Cup final has been been hit with a lifetime ban by Football Australia.

But their achievement was overshadowed by the anti-social behaviour of some of their supporters as they went down 2-0 to Macarthur FC last Saturday night.

It included Nazi salutes, a group of fans booing through the Welcome to Country, and the chanting of songs with fascist links.

FA banned one fan for life on Wednesday and concluded an investigation into a second fan on Friday, resulting in the same penalty.

Both fans are now banned from attending any matches sanctioned by FA, including NPL, A-Leagues, Australia Cup and national team matches.

“The ban is effective immediately,” the governing body said in a statement.

“As with the first ban issued by Football Australia on Wednesday, the conduct in question relates to a fascist salute or similar gesture conducted during the match and captured on the host broadcast.”

FA also expects to receive submissions from United on Friday in respect to a show-cause notice issued because of crowd behaviour during the Cup final.

Former Socceroos defender Tony Popovic, who made a name for himself with the club previously known as Sydney Croatia during the 1990s, was disappointed some fans had tainted his old side’s appearance in the Australia Cup final.

“It’s a shame because it was a wonderful game, a wonderful occasion,” now-Melbourne Victory coach Popovic told reporters on Friday.

“A fantastic football club had an opportunity to play in a final and hopefully next time that happens we can just talk about the great colour and passion and noise that a football club from the NPL can bring.”

There could be further penalties to come, with FA continuing to review anti-social behaviour at the Cup final with the clubs and law enforcement.

Following the game, NSW Jewish Board of Deputies chief executive Darren Bark said: “These vile symbols and salutes have no place in modern Australian society.

“They represent the ultimate manifestation of evil – an evil which led to the murder of millions of innocent civilians during WWII, including six million Jews and thousands of Australian Diggers who lost their lives fighting against the Nazis during WWII.

“Reprehensible conduct such as this causes immense distress to the victims of Nazi crimes and their descendants, whilst undermining our cohesive multicultural society.”