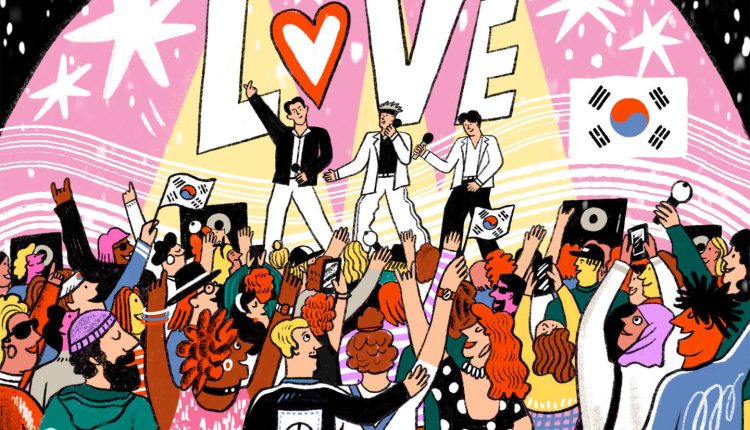 A meeting can change the course of a life. Former student in psychology, Inès Zarrouga was not fulfilled. Then she discovered K-pop: “I dared to stop my studies, because I have a goal now. I work as an order picker for an online supermarket. When I have saved enough money, I will move to South Korea. »

In the meantime, the young 19-year-old woman dawdles at the Pan Piper in Paris. In mid-November, this former flower hall converted into an event space hosted the K-pop Fest. Ines bought “a Korean version of the Little Prince, with explanations in French on the translation of sentences and grammar”. Entirely devoted to Korean pop culture, the festival attracted hundreds of young people from all over Ile-de-France.

At the entrance, a group of girls reproduces the choreographies of their favorite stars. In the auditorium, we shout around a noraebang giant (“karaoke”). Upstairs, we snatch cases, key rings, tote bags, cosmetics and all kinds of K-pop gadgets. Despite a three-hour round trip, Adjara Diarra, 26, made the trip from Essonne to attend this annual meeting. The medical assistant uses Korean makeup, dresses “neutrally, Seoul-style”and occasionally goes to Paris, just to go to the Korean restaurant.

Installed on a Twister carpet where the faces of the members of the South Korean boy band MCND act as color chips, Melissa Benneouala, 21, says that K-pop saved her life, in particular with I Will Fightfrom vocalist Key: “When this song came out, I was depressed, I had suicidal thoughts. This hymn to life, which encourages to fight, helped me to hold on. »

Read also Article reserved for our subscribers “Idols”, an immersion in the ruthless universe of K-pop

This dazzling breakthrough in Korean culture has a name: hallyuliterally “Korean wave”. “It aggregates a wide variety of products − K-pop, K-dramas, K-films, manhwas [bande dessinée coréenne] − whose only common point, in the eyes of the layman, is to be produced in South Korea and to be globally successful, especially among young people”we read in K-pop, soft power and global culture (PUF, 314 pages, 22 euros). For the authors of the book, Vincenzo Cicchelli and Sylvie October, the hallyu is one of the major cultural phenomena of the beginning of the 21ste century : “Reflecting the rapid modernization of South Korean society, the cultural pop wave of the land of the Morning-Calm has conquered the world in just thirty years, sweeping away the hegemony of the United States over the whole of pop culture. » In 2018, according to a survey conducted by the Korea Foundation, there were worldwide more than 89 million of fans of the hallyuwith a 22% increase in one year, and 1,843 fan clubs outside of South Korea, in 113 different countries.

You have 72% of this article left to read. The following is for subscribers only.