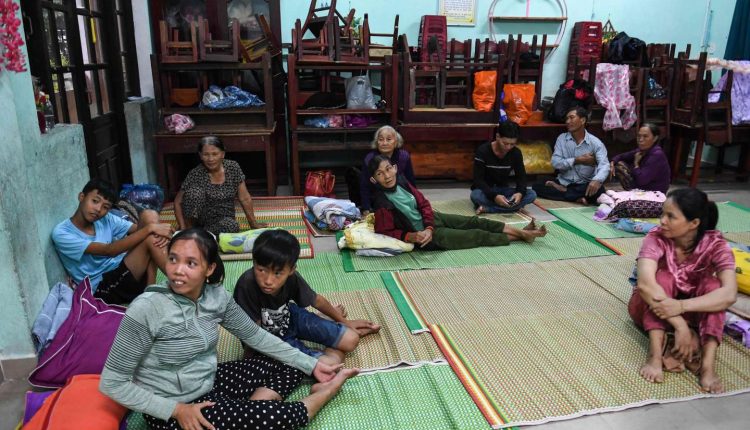 Typhoon Noru made landfall in Vietnam on Wednesday morning, causing power cuts in the center of the country, where tens of thousands of residents sheltered from strong winds and heavy rains. “The position of the center of the typhoon at 4 a.m. on September 28 is between Danang and Quang Nam”said the country’s National Center for Hydrometeorological Forecasts, adding that wind speeds were between 103 km/h and 117 km/h.

In Danang, the third largest city in Vietnam, where residents were banned from going out on the streets, buildings were damaged by strong winds, which toppled trees and tore roofs, according to journalists from Agence France- Press (AFP) on site. Nationwide, more than 300,000 people took refuge in shelters as meteorologists identified Noru as one of the biggest storms to hit the Southeast Asian country.

Authorities announced on Tuesday evening that they had evacuated nearly 260,000 people from their homes, including in the tourist town of Hoi An, where the Hoai River was about to overflow. “The typhoon was terrible. I couldn’t sleep, because the wind was so strong and loudlocal resident Nguyen Thi Hien told AFP. I heard the sound of trees and signs falling outside. I was scared. But we were prepared, so luckily the damage isn’t that high. »

On Wednesday morning, residents were already busy clearing the streets of pieces of sheet metal and torn vegetation that blocked some roads and damaged cars. Tourists were also strolling and taking advantage of the few shops already open. Three hundred houses in the coastal province of Quang Tri had their roofs ripped off on Tuesday evening as winds began to pick up.

Read also: Article reserved for our subscribers How the Magdalen Islands, on the east coast of Canada, withstood the onslaught of storm Fiona

In Vietnam, wind strength was weaker than initially expected, but meteorologists forecast heavy rains to continue throughout the day, and warned of possible landslides and severe flooding. Nearly half of the airports have been closed, as have schools and offices in several provinces in the center of the country, including Danang. Power outages were also reported.

Ten dead in the Philippines

The Defense Ministry has mobilized around 40,000 troops and 200,000 security personnel, equipped with armored vehicles and boats in preparation for rescue and relief operations, state media said. The central section of the highway linking the capital, Hanoi, in the north, to the Ho Chi Minh City metropolitan area, in the south, was also closed.

Noru, then classified as a supertyphoon, hit the Philippines this week, killing ten people, including five rescuers, according to a new official report. Eight people are also missing. After Vietnam, Typhoon Noru is expected in Laos, then in Thailand. Thai authorities expect its arrival on Thursday, but in the degraded form of a tropical storm, less strong than a typhoon. Heavy rains are expected in the northern, northeastern and central provinces of the kingdom, until Sunday, with the risk of flooding locally.