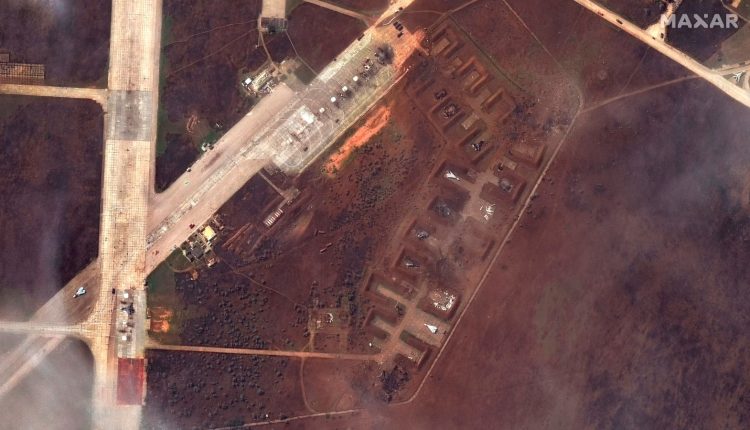 Yesterday, Friday, the US Department of Defense announced that no US weapons were used to attack the Russian air base in Crimea, noting that it was ignorant of the causes of the devastating explosions at the site.

It is believed that Ukrainian forces were behind the explosions, which rang out Tuesday at the Saki air base in the Ukrainian Crimea, which Russia annexed since 2014. The explosions destroyed eight aircraft and ammunition stocks.

No one has claimed responsibility for the explosions. The causes of the explosions at the air base, which is a major starting point for Russian military operations in Ukraine, are not yet clear.

While Russia described what happened as an accident, experts say that satellite images as well as ground-based video recordings suggest it was an attack.

The United States provided Ukraine with large quantities of weapons and ammunition, but did not provide it to enable it to launch strikes on the territory controlled by Moscow from the territory under the control of Kyiv.

“We have not provided (Ukraine) with what would allow or enable it to strike Crimea,” a senior US defense official told reporters.

The official ruled out that the explosions were a strike by medium-range precision-guided tactical missiles (ATACMS), which Kyiv requested to supply and that could be launched by the US “HIMARS” missile systems located in Ukraine.

“It’s not ATACMS because we didn’t provide them with these missiles,” the official said.

The official stressed that the Pentagon did not have information that would confirm whether al-Qaeda was targeted by a missile attack or whether the explosions were caused by an act of sabotage.

But he said that what happened “had a great impact on the Russian air (operations) and on the elements of the air force.”

On Friday, Britain’s Defense Intelligence Service said the multiple explosions documented in video footage by people in the area were “almost certainly caused by the explosion of up to four unsealed munitions storage areas”.

The agency said the explosions destroyed or severely damaged five Su-24 fighter-bombers and three Sukhoi-30 multirole aircraft, but the runway was still usable.

According to the British Defense Intelligence Service, “Saki is mainly used as a base for aircraft of the Black Sea Fleet of the Russian Navy.”

The agency noted that the fleet’s air capabilities had been greatly weakened.