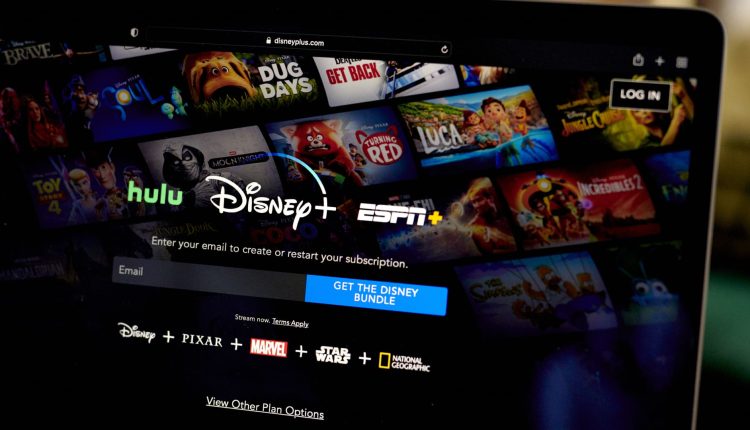 The Disney+ website on a laptop computer in the Brooklyn borough of New York, US, on Monday, July 18, 2022.

A contradiction is developing in the world of streaming media, and it revolves around bundling.

There’s a consistent drumbeat of expectation that streaming services will eventually all bundle with each other for an overall discount, with the end product looking something like traditional pay TV.

Paramount’s peak earnings growth is likely in the past, Wells Fargo says in downgrade

Hypothetically, a streaming bundle could include Netflix, Disney+, Hulu, ESPN+, HBO Max, Discovery+, NBCUniversal’s Peacock, and Paramount+ for, say, $50 a month. Creating a facsimile of a larger, multi-company bundle for streaming services is a concept under consideration by several in the industry, including Peacock owner NBCUniversal, according to people familiar with the matter.

The traditional pay TV business has been highly profitable for decades for large media companies. Still, almost three years since the launch of Disney+, which marked the unofficial start of the streaming wars, nothing like a cable-like digital streaming package exists — or is even close to formation. Competitive imbalances and unanswered strategic questions have prevented it from developing.

In those cases, executives can set their own rules and use their own technology. Outside of that, the obstacles of being a pioneer in setting new bundling standards have thus far been prohibitive.

For consumers that buy many streaming services already, purchasing a bundle of them for a discount would be an instant money saver.

For corporations, pushing together streaming services reduces the number of people who cancel each month, known in the industry as churn. This is a useful tool for media executives, who want to show sustained streaming growth.

“Churn is one of the most important metrics here for the sustainability of this model, and I’m confident that we’re going to be able to significantly bring that down,” Warner Bros Discovery CFO Gunnar Wiedenfels said last month about his company’s decision to merge HBO Max and Discovery+.

Offering a large bundle would also likely lead to better options for helping viewers discover new shows and movies. Figuring out which streaming service has which movie or TV show is still a forehand-slapping nightmare for most users.

Allowing consumers to stay in one service, rather than forcing them to jump from application to application to find shows, also prevents unwanted friction for executives who want to maximize their customers’ time spent watching video.

“There’s a little bit of consumer friction there in terms of having to go out of one app and into another,” Disney CEO Bob Chapek said last month, discussing the idea of integrating Hulu, Disney+ and ESPN+ into one user interface. “We like the idea of eliminating friction.”

One obstacle to bundling is pricing. Tying together services for a discount will likely mean lower average revenue per user, or ARPU, for all the services involved. Companies must decide they’re willing to make the ARPU tradeoff for the chance at adding more subscribers. They also need to determine the right balance between how much a haircut each participant should take, based on the relative popularity of the bundled services.

Still, the discount can’t be too steep, especially for companies that are still relying on a significant amount of revenue from traditional pay TV. A company such as AMC Networks, mainly known for its eponymous cable-TV network with shows like “The Walking Dead,” derives more than 50% of its total revenue from the linear bundle in the U.S. If AMC Networks were to bundle with another streaming service, new CEO Christina Spade would likely want to be paid the same (or more) as she already gets from pay TV distributors. Otherwise, AMC Networks risks having to lower its price to all of its current distribution partners when its next contract renewal arises.

“There will probably continue to be competitive jostling that will stand in the way of inter-company bundling versus intra-company bundling,” said Engine Media’s Rogers, who also used to run DVR company TiVo. “Obviously there’s a cost to that because the bundling discount means lower fees.”

The second hurdle is figuring out who will control the user experience. Every major media company wants to own the direct consumer relationship and the data that comes along with knowing how customers behave. This is especially helpful for advertisers, as Netflix and Disney get set to launch their own ad-supported products.

There are a number of potential aggregators that could offer a bundle of streaming products. Digital video distributors, such as Roku, Amazon or Apple would be obvious candidates. But those companies also offer their own competing streaming services – The Roku Channel, Prime Video and Apple TV+, respectively – which could deter broader partnerships.

Perhaps an uninvolved third party that doesn’t sell its own streaming service — Microsoft or Charter or Verizon — could sell a bundled offering. Wireless companies already offer promotional pricing to streaming services as sign-up bonuses. But media companies that now have direct-to-consumer relationships may resist packaging that eliminates instant contact with their customers.

If each major streaming service allowed other streamers to be integrated into their user interfaces, several questions would need to be answered. Take a hypothetical Peacock-Paramount+ bundle. Would each company integrate the others’ content into their own application? If so, would a viewer using the Paramount+ application that chose a Peacock show watch in the Peacock interface or the Paramount+ interface?

Now multiply those questions for every company that joined a bundle.

“Some form of universal search will be key,” Rogers said of a potential streaming bundle in the future, noting the leading candidates would be smart-TV and connected-TV device manufacturers, as well as cable-TV companies. “That is the hardest thing today for a consumer – video is so balkanized to find what you want and where.”

The third problem is industry competitive dynamics. Some media executives may view bundling as a sign of weakness — a signal that their company can’t compete on its own. That can best be illustrated by focusing on NBCUniversal’s Peacock.

Peacock plans to lose $2.5 billion this year before breaking even in 2024. Bundling with other services would be a straight forward way for Peacock to build a subscriber base.

NBCUniversal executives have held exploratory talks at various times about forming a bundle with several of the largest streamers, including HBO Max and Paramount+, according to people familiar with the matter who asked to remain anonymous because the discussions are private. An NBCUniversal spokesperson declined to comment.

Peacock’s inquiries have thus far been met with a “no.” The general sentiment from potential larger partners is bundling would help Peacock more than it would help them. NBCUniversal and Paramount Global have a joint venture streaming service in Europe, which could theoretically provide a blueprint for a similar service in the United States.

But Paramount Global CEO Bob Bakish has said privately he has no interest in partnering with Peacock in the U.S. because he views a bundle as benefitting Peacock more than it would Paramount+, according to people familiar with the matter. Paramount+ ended its most recent quarter with more than 43 million global subscribers. A Paramount Global spokesperson declined to comment.

“Streaming has moved to the phase where customer loyalty and ancillary revenue are becoming the focus,” said Jason Anderson, CEO of boutique investment bank Quire. “We are past subscription growth merely for the sake of subscription growth. To have stable subscriber numbers, you need your audience to be loyal to you and your content, not that of a partner.”

In the streaming world, each media company is a direct competitor for eyeballs against each other. Aiding the competition may no longer be smart business.

With no clear path to partner with one of the larger streamers, Peacock has also held early talks with smaller streamers, including BritBox, AMC+ and Starz, about forming a bundle, said people familiar with the discussions. Theoretically, Peacock could begin to look more like a mini-streaming distributor, similar to how its parent company, Comcast, aggregates cable networks.

But these conversations also haven’t had led anywhere yet.

Richard Rankin and Sophie Skelton attend the Season 6 Premiere of STARZ “Outlander” at The Wolf Theater at the Television Academy on March 09, 2022 in North Hollywood, California.

The problem for Peacock is that adding smaller services doesn’t necessarily move the needle for NBCUniversal. Starz, which has shows like Outlander and Power, ended its most recent quarter with 12.2 million U.S. subscribers. AMC+ has 10.8 million subscribers. BritBox, which focuses on BBC and British content, last year said it 2.6 million global subscribers. Just as Peacock suffers from trailing the larger streamers, it isn’t urgently putting together a strategy around niche services that may not impress Wall Street investors. NBCUniversal executives also have faith Peacock can still flourish by itself.

From the standpoint of niche services, Peacock hasn’t come to them with a coherent strategy, according to several people familiar with the talks.

It remains unclear whether Peacock would charge a higher price for adding outside content, and if so, how it would split that revenue with other bundle participants. Peacock has broached the idea of simply adding content from other companies to its $4.99 per month (with commercials) and $9.99 per month (no ads) services for a subscriber fee it would pay to partners, but it hasn’t figured out the economics, two of the people said.

The complexity of bundling is another motivation for media companies to merge with each other under one leadership team rather than figuring out solutions with partners. Starz, which is separating from Lionsgate, could be a candidate to acquire smaller services looking for more scale, CNBC reported in June.

Instead of streaming services bundling together, it’s thus far been easier to attach to non-video services to gain additional eyeballs. The most recent example of this has been Walmart’s announcement it will include free Paramount+ subscriptions for all Walmart+ subscribers. Walmart also held talks with a number of other streamers before reaching an exclusive deal with Paramount+, including NBCUniversal, Disney and Netflix, according to people familiar with the matter.

It was important for Paramount to be the exclusive partner with Walmart as it didn’t want to be overshadowed by a larger player, said a person familiar with the matter.

But this doesn’t solve the larger issue of reducing the annoying toggling between services. It arguably creates more confusion, because Walmart+ is yet another independent monthly subscription for consumers to juggle.