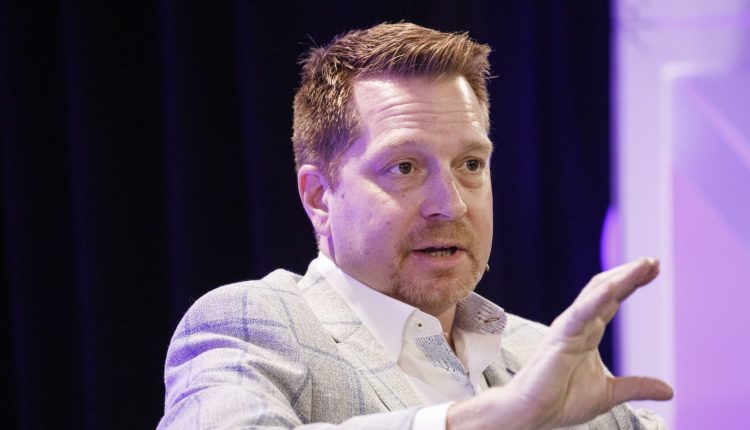 George Kurtz, chief executive officer of CrowdStrike Inc., speaks during the Montgomery Summit in Santa Monica, California, U.S., on Wednesday, March 4, 2020. The Montgomery Summit gathers entrepreneurs, investors, and executives to discover the most important innovations in business and technology.

CEO George Kurtz said in a release that the company’s total net new ARR was below expectations. Last year, CrowdStrike’s ARR increased by more than 67% in the third quarter, and the company added 1,607 net new subscription customers for that same period.

Analysts at Morgan Stanley also said CrowdStrike’s results were “disappointing,” but they said estimates did not reflect the current macroeconomic environment. They encouraged investors to buy the sell-off in a Wednesday note.

“With forward estimates appropriately level set, we think this pullback provides an attractive entry point to accumulate shares in a premier SaaS security franchise,” they said.

An analyst at Stifel said CrowdStrike’s results were “disappointing” and downgraded the stock from buy to hold.

“Although management’s preliminary CY24 outlook was below consensus, we believe it could take a few quarters until expectations are fully de-risked, and as a result, we lower our rating to Hold,” they wrote in a Tuesday note.

CrowdStrike’s stock is down more than 32% this year, and the analyst expects further downside ahead after the company issued light guidance. The analyst’s $120 price target, slashed from $225, is about 13% below where shares closed Tuesday.

Needham analysts said they remain a “convinced buyer” of CrowdStrike for the long term.

They believe the company’s slower guidance opened a “can of worms” about bear market concerns, but they said they think most of those concerns are “misplaced.”

“We suspect CRWD will find itself in the penalty box into year-end despite its strong growth, operating leverage and Cash Flow as investors worry about lengthening deal cycle time and potential for further deceleration,” they wrote Wednesday. “We remain positive on CRWD.”