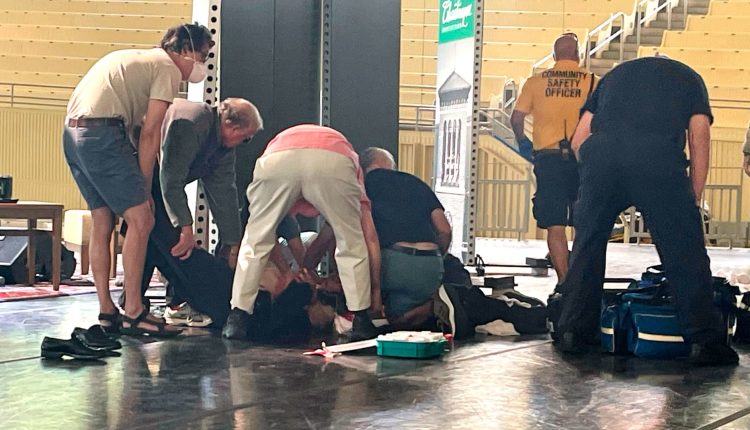 Author Salman Rushdie is tended to after he was attacked during a lecture, Friday, Aug. 12, 2022, at the Chautauqua Institution in Chautauqua, NY.

Author Salman Rushdie was attacked while on stage for a panel in western New York Friday.

The New York State Police released a statement regarding the incident:

“On August 12, 2022, at about 11 a.m., a male suspect ran up onto the stage and attacked Rushdie and an interviewer,” a statement from the department read. “Rushdie suffered an apparent stab wound to the neck, and was transported by helicopter to an area hospital. His condition is not yet known. The interviewer suffered a minor head injury. A State Trooper assigned to the event immediately took the suspect into custody”

A spokesperson from the Chautauqua Institution, where the panel was being held, told CNBC that the institution was coordinating with emergency officials on a public response following the attack.

The Wylie Agency, which represents Rushdie, did not immediately respond to a request for comment.

Rushdie’s book “The Satanic Verses” forced him into hiding after it was banned in Iran and a $3 million bounty was put on his head. The Iranian government has distanced itself from the bounty, according to the AP, but the fatwa has been continued by a semi-official religious organization, which raised the bounty to $3.3 million.

Rushdie was knighted in 2007 for his work and has been awarded many of the top literary prizes, including two Whitbread Prizes for Best Novel.

He was scheduled to sit on a panel alongside Henry Reese, president of City of Asylum in Pittsburgh, an organization that provides sanctuary to writers exiled under threat of persecution.

New York Governor Kathy Hochul thanked the New York State Police for their response to the attack on Rushdie.

“Our thoughts are with Salman & his loved ones following this horrific event,” wrote the Governor. “I have directed State Police to further assist however needed in the investigation.”