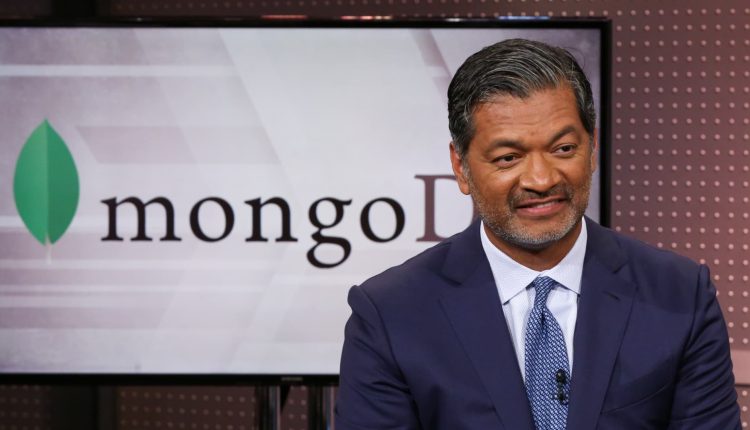 MongoDB shares rose 27% in extended trading on Tuesday after the database software maker surprisingly swung to a profit.

Here’s how the company did:

MongoDB’s revenue rose 47% year-over-year in the quarter that ended on Oct. 31, according to a statement. Its net loss widened to $84.8 million, compared with a net loss of $81.3 million in the year-ago quarter.

The company said it had 39,100 customers at the end of the quarter, better than the 38,900 average estimate among analysts polled by StreetAccount. MongoDB’s cloud database service called Atlas represents 63% of total revenue.

“The strength in our business was driven by improved Atlas consumption trends and continued strength in new business activity,” CEO Dev Ittycheria said in the statement. Gains came in the mid-market and at enterprises in Europe, Michael Gordon, MongoDB’s operating chief and finance chief, said on a conference call with analysts.

The outperformance is welcome news for software investors, who have seen troubling data points of late. Last week, Salesforce said clients are becoming more cautious in preparation of worsening economic conditions. The company broke from tradition and avoided providing a forecast for the coming year.

During the quarter, MongoDB said it would make it easier for developers to use pay-as-you-go pricing for the company’s cloud database on Microsoft’s Azure cloud.

Before the after-hours jump, MongoDB shares were down 73% this year, underperforming the S&P 500 index, which has declined 17% over the same period.

WATCH: Companies like MongoDB and Atlassian are more defensive places to be, says Citi’s Radke