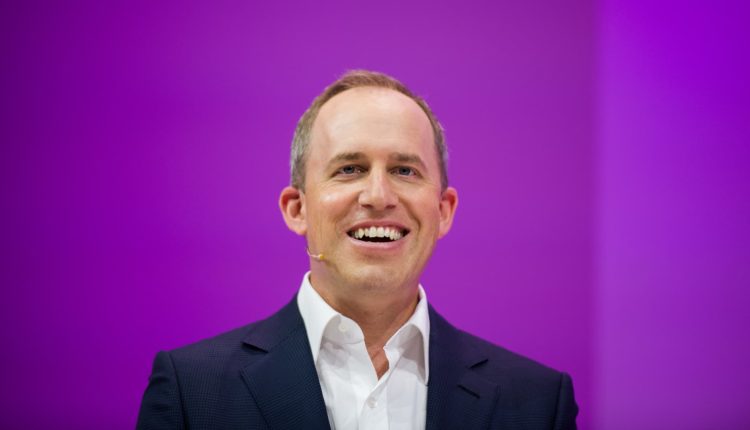 Bret Taylor, co-CEO of Salesforce, speaks at the Viva Technology Conference in Paris on June 15, 2022.

Ten months after his promotion to co-CEO of Salesforce, serving alongside famed founder Marc Benioff, Bret Taylor is gearing up to take the stage at the annual Dreamforce conference for the first time under his new title.

A career technologist with a master’s degree in computer science from Stanford, Taylor acknowledged to CNBC that Salesforce’s big product unveiling for this year’s event is “unabashedly geeky.” It’s called Genie, and it’s designed to update Salesforce’s dominant sales database software with modern technology that gives salespeople real-time information at their fingertips.

“We’re really adding a new technology capability to our platform,” Taylor said in an interview. Taylor and Benioff will deliver their keynote on Tuesday, starting at 10 a.m. Pacific Time in San Francisco.

To some degree, Salesforce is acknowledging that its existing systems have gotten somewhat dated. The 23-year-old company’s original data storage software functions with a transactional database from Oracle, where Benioff spent 13 years before starting Salesforce. The world has become far more complex in the intervening decades, and companies are flocking to databases that can process data from many more sources and enable speedier decisions.

Salesforce’s move toward Genie began in 2019, when the company introduced a customer data platform, or CDP, that marketers can use to collect data on clients before sending them ads. With Genie, marketers will have the very latest information available through Salesforce’s Marketing Cloud.

Taylor said that, over time, Genie will be integrated into Salesforce’s other key products — its clouds for sales, service and commerce. Companies can pay to add Genie capabilities to their existing Salesforce installations, a spokesperson said.

Taylor, a co-creator of Google Maps who also led Facebook’s technology group before joining Salesforce in 2016 through the acquisition of his startup Quip, is under some pressure from Wall Street as rising interest rates and the threat of recession lead investors out of growth stocks. Salesforce shares have tumbled 40% this year, more than double the drop by the S&P 500, and are trading near their lowest since April 2020.

In its earnings report last month, Salesforce trimmed its full-year expectations for profit and revenue. It now expects sales growth for the year of roughly 17%, down from 25% in the last fiscal year, which would mark by far the slowest pace of expansion since the company went public in 2004.

Taylor also has a lot going on outside of Salesforce. He’s the chairman of Twitter, which is embroiled in a heated and very public legal battle with Elon Musk that will determine the future of the social media company. Twitter is suing Musk to try and enforce the Tesla CEO’s acquisition agreement that he subsequently attempted to terminate.

Taylor declined to talk about the ordeal itself and said it “doesn’t come up a lot” when he meets with Salesforce clients. And that’s how he spends most of his time.

With the Genie addition, Salesforce will bolster the capabilities of Einstein, the company’s artificial intelligence engine that runs in Sales Cloud and other applications. Einstein can recommend which business opportunities are most likely to convert into sales, and Genie will pull in the most recent information, so suggestions are drawn from data in seconds, and soon, in just milliseconds.

Genie will also work in Tableau, the data analytics tool that Salesforce acquired in 2019, making charts as current as possible.

Salesforce’s rivals in marketing software, including Adobe and Oracle, have been touting the importance of real-time content data platforms that can draw on a variety of data and respond to the most recent impulses of current and potential clients. Salesforce is trying to bring those capabilities to other departments, like customer service.

“I was more shocked it took so long,” she said.

At least since 2017, Salesforce executives have been promoting a concept called Customer 360, which involves serving up a patchwork of information on each customer to provide better treatment. The problem was that data on events wasn’t getting piped into the system as they were happening. Taylor is familiar with that criticism.

“I’ve heard that feedback before,” he said. Taylor added that with the “technological breakthrough” of Genie, that shouldn’t be an issue in the future.

First Horizon Bank in Memphis, Tennessee, implemented Salesforce’s CDP platform earlier this year. The software helps the bank orient new customers and pitch them on mortgages, and it’s more reactive to behavior than the manual and batch-processed system First Horizon relied on in the past, said Erin Pryor, the bank’s marketing chief. Unlike online ads that can make some people feel as if they’re being followed a little too closely, Pryor said this level of product targeting is welcomed by consumers.

“I don’t think there’s ever going to be a complaint about your institution knowing you and really being able to give you content and advice on things that are important to you,” Pryor said.

All you need to know about ChatGPT, the A.I. chatbot that’s got the world…

Uber beats estimates and the stock is up