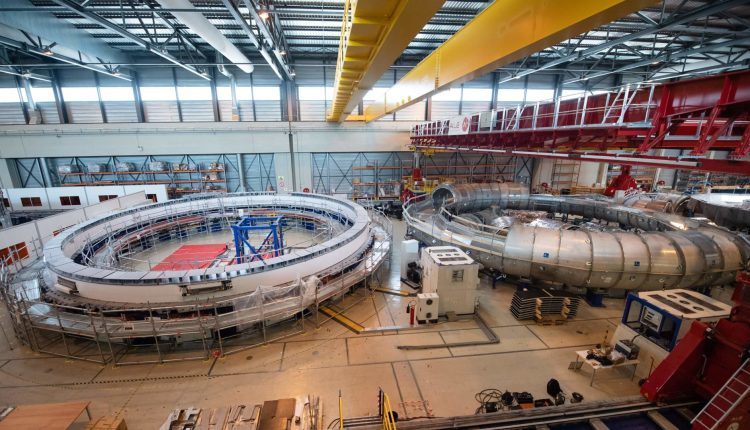 A picture shows the winding facility for the construction of poloidal field coils which will be part of the magnetic system that will contribute to confine and model plasma during the launch of the assembly stage of nuclear fusion machine “Tokamak” of the International Thermonuclear Experimental Reactor (ITER) in Saint-Paul-les-Durance, southeastern France, on July 28, 2020. – Thirty-five nations are collaborating in the ITER energy project aimed at mastering energy production from hydrogen fusion, as in the heart of the sun, a potential new source of carbon-free and non-polluting energy.

The United States government is putting money behind private-sector nuclear fusion companies for the first time, and that’s an indication of how momentum is building behind the “holy grail” of clean energy.

At the Global Clean Energy Action Forum in Pittsburgh on Thursday, the Department of Energy officially announced $50 million will go towards private fusion companies in public-private partnerships.

“This money signifies that the U.S. government is getting serious about building a fusion program that will have commercial significance, on an accelerated timeframe,” Andrew Holland, the CEO of the Fusion Industry Association, an industry trade group, told CNBC.

“If the U.S. government puts its full weight behind accelerating fusion energy to the grid, it could bring a transformational new energy source to the U.S.,” Holland told CNBC.

Conventional nuclear reactors are based on nuclear fission, where a neutron slams into a large atom and splits it, releasing energy in the process. Nuclear fusion is when two heavier atoms slam together to form a heavier atom, and is the way stars are powered. It is often seen as the “holy grail” of clean energy because it offers virtually unlimited energy, releases no greenhouse gasses, and generates no long-lasting nuclear waste. But it’s proven very difficult to duplicate the process safely on earth in a way that can be scaled and commercialized.

The U.S. government has put federal money into fusion research since the 1950s and today invests about $700 million per year. Holland told CNBC. But that money has mostly gone toward national labs and universities and toward the primary international research project in France, ITER, but the $50 million announced for private fusion companies “is the first substantial investment by the U.S. government into private-sector fusion energy companies,” Holland told CNBC.

“This is not for pure science. This is a commercial development and deployment program,” Holland told CNBC.

The $50 million is help companies prepare detailed plans, but it is not enough money to fund the full construction of fusion power plants, which will be much more expensive. But it will help bolster U.S fusion companies and give them credibility.

“This is critical since fusion power is such an ambitious but vital technology for the United States and our collective fight against climate change. We want a US firm to be the first to reach net power,” Matthew Moynihan, a nuclear fusion consultant, told CNBC. By “net power,” Moynihan is referring to a key threshold in the fusion industry whereby more power is generated than it takes to catalyze the reaction. “This is also more than just a paycheck: Winning this funding will give firms the government’s stamp of approval, something investors will want to see as they consider adding more money to the industry,” Moynihan told CNBC.

The private sector fusion industry has attracted almost $5 billion in venture and other funding according to the Fusion Industry Association.

Notable recent raises include a $1.8 billion raise from Commonwealth Fusion Systems, a spinout from Massachusetts Institute of Technology research, from a slew of heavy-hitting investors including Bill Gates, John Doerr, Salesforce co-CEO Marc Benioff’s Time Ventures, and Google, to name a few. Another private fusion company, Helion, announced a $500 million raise led by Silicon Valley insider Sam Altman and which includes the potential for another $1.7 billion in funding depending on Helion meeting particular funding goals.

While the program is currently funded at $50 million over the next 18 months, Congress has authorized spending as much as $415 million in future budgets. The public private fusion funding program was first authorized in the Energy Act of 2020.

Today in Crypto: PayPal to Expand its…

The Fed’s path to a…

Harry and Meghan hit out at…

The Saudi Crown Prince and the Chinese…