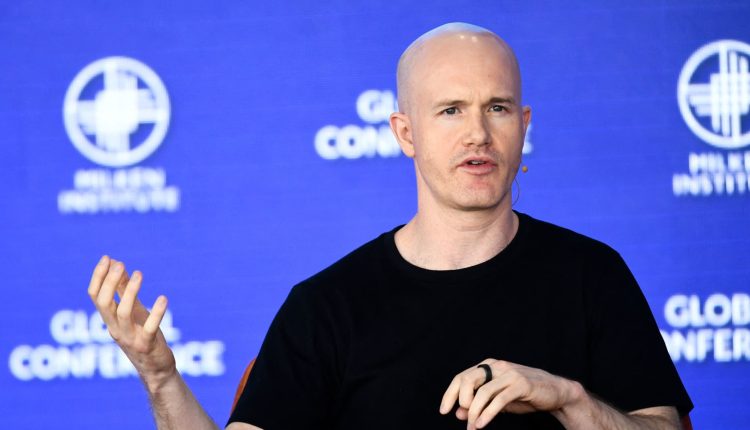 Brian Armstrong, CEO and Co-Founder, Coinbase, speaks during the Milken Institute Global Conference on May 2, 2022. in Beverly Hills, California.

Coinbase shares dropped in extended trading on Tuesday after the crypto exchange reported a loss of over $1 billion in the second quarter and missed analysts’ estimates for revenue.

Here’s how the company did:

Coinbase’s revenue declined nearly 64% as investors exited the crypto market after last year’s dramatic run. Retail transaction revenue came in at $616.2 million, down 66% and below the $667.1 million consensus among analysts polled by StreetAccount.

Coinbase reported a $1.1 billion net loss, compared with $1.59 billion in net income in the same quarter last year, according to a letter to shareholders. One factor was a $377 million non-cash cryptocurrency-related impairment charge. Coinbase’s own cryptocurrency assets at the end of June were worth $428 million, down from about $1 billion at the end of March.

“Q2 was a test of durability for crypto companies and a complex quarter overall,” the company said in the letter. “Dramatic market movements shifted user behavior and trading volume, which impacted transaction revenue, but also highlighted the strength of our risk management program.”

The company said it had 9 million monthly transacting users during the period, down from 9.2 million in the first quarter but more than the 8.7 million StreetAccount consensus. Macroeconomic and cryptocurrency credit resulted in lower trading volume during the quarter, the company said.

It was a challenging quarter for Coinbase from an operational perspective.

Cryptocurrency controversies helped to push down prices in what some called a “crypto winter.” Coinbase’s stock tumbled 75% during the second quarter, while the price of Bitcoin plunged by about 59%. Coinbase said it was extending its hiring freeze into the foreseeable future and cutting 18% of headcount. Bitcoin accounted for 31% of transaction revenue in the quarter, the highest level since the first quarter of 2021, while 22% of transaction revenue was associated with Ethereum.

Coinbase updated its outlook for the full year. It now expects 7 million to 9 million monthly transacting users, down from a range of 5 million to 15 million three months ago. Management said it expects average transaction revenue per user in the low $20 range, rather than pre-2021 levels.

The company said has set a plan for marketing spending for the second half of the year that’s in keeping with its efforts to manage expenses, including “optimization of paid media.” And it reduced its forecast for technology, development and general and administrative expenses to $4.0 billion to $4.25 billion from the $4.25 billion to $5.25 billion range a quarter ago.

Executives will discuss the results on a conference call starting at 5:30 p.m. ET.

This story is developing. Please check back for updates.