World Cup in Qatar: watch out for this unofficial guide which lists the behaviors to avoid during the competition 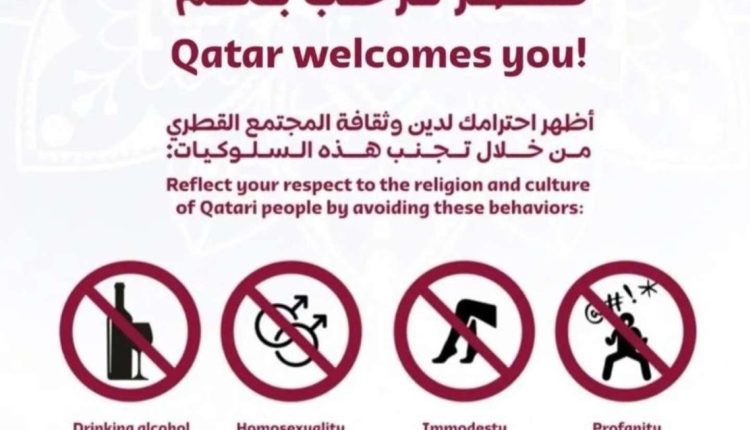 Less than two months before the FIFA World Cup to be held in Qatar from November 20 to December 18, more and more voices are being raised to denounce the choice of the organizing country. In addition to the criticisms of the environmental impact of the competition, and the living conditions of the workers on the construction sites of the stadiums judged “disastrous” by the NGO Amnesty International, the laws in force in this conservative Muslim country have been strongly criticized and deemed contrary to the values ​​of football and human rights.

As proof, several Internet users have posted a guide on social networks listing in English the behaviors prohibited in Qatar. “Qatar welcomes you. Show your respect for the religion and culture of the Qatari people by avoiding these behaviors,” we read as a warning.

There follows a list of eight “behaviours” to avoid, such as homosexuality, indecency in clothing, drinking alcohol, swearing, going on a date, or taking pictures of a person. without his permission. “They are going to have fun for the football world cup”, quipped in response a surfer on Twitter. “Qatar has set the rules for football fans in the 2022 World Cup…”, concludes another.

They are going to have fun for the football world cup… https://t.co/Mo38qWmvcV

FIFA is not the source of this document

Contrary to what is written, the guide was designed neither by the official authorities of Qatar, nor by the International Federation of Association Football (FIFA), nor even by the Qatari committee in charge of organizing the competition. The official Twitter account of the 2022 World Cup, Road to 2022, also reacted on Twitter to denounce a manipulation:

“The ‘Qatar welcomes you’ poster circulating on social media does not come from an official source”, explains its press release. And to warn: “We strongly urge fans and visitors to rely only on official tournament organizer sources for travel advice. »

The reality of certain laws applied in the country

This poster was actually created by the collective Reflect your Qatar, which “contributes to the consolidation of Islamic values ​​that underpin Qatari identity”, according to Reuters. This group of Qatari citizens born in 2014 has given itself the mission of promoting ” values ​​” of the country, and remind foreigners to respect the conservative customs of the Emirate. With Reuters, FIFA also reacted by confirming that it was not an official document of the federation.

In its statement on Twitter, the official committee of the event also maintains that the poster “contains factually incorrect information” and that the tournament organizers “have been clear from the start that everyone is welcome to come to Qatar to enjoy the 2022 World Cup”. The message assures in passing that an official guide must soon be published, with the help of FIFA, to advise supporters before their stay. And to conclude:

“Qatar has always been an open, tolerant and welcoming nation. Football fans and international travelers who will be present during the tournament will have the opportunity to experience this firsthand. »

This idyllic picture of Qatar, however, comes up against the reality of certain laws applied in the country, as pointed out for a long time by several human rights associations. In July, the NGO Human Rights Watch denounced a “world cup of shame” recalling that Qatar “represses the rights of LGBT people and punishes relationships sexual offenses between persons of the same sex with a penalty of up to seven years in prison”.

Read also Article reserved for our subscribers “The 2022 World Cup in Qatar is a little bit of sport, a lot of money, and massive human rights violations”

In this Muslim country of Wahhabi tradition, an ultra-rigorous current of Islam, alcohol consumption is also a sensitive subject. Prohibited in public places, it is reserved only for private spheres and hotels frequented by the wealthiest. However, Qatar accepted, not without reluctance, the consumption of beer for supporters around the stadiums during the World Cup. But this will be strictly supervised during the competition.

Read also: World Cup 2022: the Emir of Qatar promises a welcome “without discrimination” of football supporters

All items on the World Cup in Qatar.