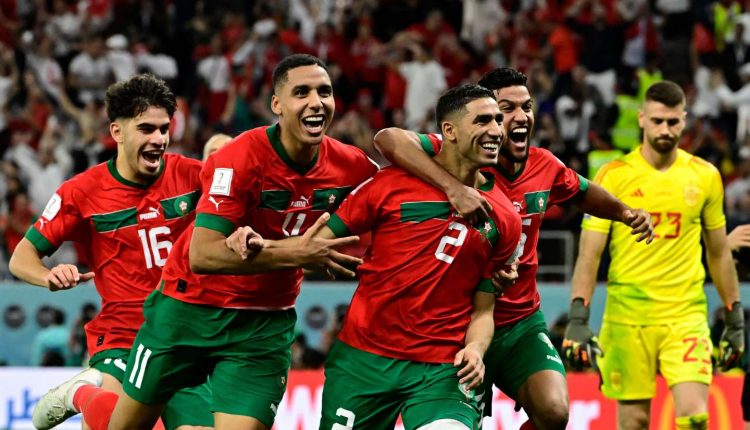 The perfect panenka of a Madrid native buries the hopes of Spanish football. The irony is biting for La Roja, despairingly sterile for one hundred and twenty minutes and who deserved no better. The Moroccan public exults. A red tide is stirring in the stands of the Education City stadium in Doha. Hispano-Moroccan, Achraf Hakimi could have worn the jersey of Spain but it was the Atlas Lions that the defender of Paris Saint-Germain propelled to the quarter-finals of the World Cup.

The festive communion between the players of the Cherifian kingdom, their coach Walid Regragui and their many supporters has the intensity of the first. Winner 3 shots on goal to 0, the Moroccan team reaches this stage of the competition for the first time in its history. She joins the very closed circle of African quarter-finalist selections: Cameroon in 1990, Senegal in 2002 and Ghana in 2010. She will have the opportunity to do even better, Saturday, December 10, against Portugal, executioner Tuesday evening of a weak Swiss team (6-1).

Read also: Morocco-Spain: Moroccans create a surprise and go to the quarter-finals

Last Arab representatives in the tournament, Moroccan footballers have everything to become the darling of this World Cup. If Hakimi managed the decisive shot on goal, goalkeeper Yassine Bounou, known as Bono, drove his opponents crazy. Born in Montreal and returned to the country at the age of 2, the 30-year-old stopped two Spanish attempts.

“Penalties are a little bit of intuition, a little bit of luck. Hats off to the whole team, they did the job, it was amazinghe modestly told. When you go through times like that, sometimes it’s hard to realize. We will face the next match with this desire and this pleasure that we see in the eyes of all the players. »

By his bluff and his gestures on his line, Bounou entered the brain of the Spanish shooters. Coaches like to repeat that we play like we train. We can also say that we take penalties as we play. Bad for the Spaniards.

Without energy, without genius and unexpectedly feverish, La Roja – whose players were each invited to take 1,000 penalties this season by their coach Luis Enrique – melted away. Below its standards, this team is not a title contender. Without fanfare or crowns, she died with her trainer’s diehard ideas.

On the contrary, his executioner did not tremble at the time of carrying out the sentence. Aware of its strengths and its weaknesses, the Moroccan team has done wonderfully what it has been able to do since the start of the tournament: defend and sting on counterattacks carried out at a hundred miles an hour. This team has conceded only one goal in four games, and again, an own goal from Nayef Aguerd against Canada. “I think we had a great match. Tactically, the guys followed the plan, they didn’t give up. It was hardwelcomed Walid Regragui. I said they were going to tire us and we held on until the penalties. Congratulations to them, we are going down in history. I am happy ! »

Grouped around their captain Romain Saïss and their midfield sentry Nordin Amrabat, incredible activity at the four corners of the field, the Atlas Lions had the merit of foiling the Spaniards. “We know where we are going. In this kind of competition, between putting on a show and winning, achieving your goals, you have to choose. And we have chosenRegragui explained before facing Spain. We have a team block which is very coherent, it is difficult to move us. Everyone works. »

“You have to know what to do with the ball”

Franco-Moroccan, born in Corbeil-Essonnes, Walid Regragui only took the destiny of this team into his hands on August 31st. This very short reign does not detract from his merits, but it also makes it necessary to salute the work of his predecessor Vahid Halilhodzic, kicked out overnight after three years of loyal service. When we know that the Bosnian is a cantor of defensive solidity, it is fair to think that a small part of this victory may be his.

Once this point has been evacuated, we can bow to the quality of the chess game played by Walid Regragui. At 47, he cut his teeth as a coach in the Moroccan championship, with a quick stint in Qatar. As expected, Morocco agreed to leave the ball to their opponent, who was unable to do anything with his 76.8% possession. Even more than in his previous matches against Croatia (67%) and against Belgium (65%).

The opposition of styles announced before the meeting was there: on the one hand, a Spain adept at possession of the ball until indigestion; on the other, a Morocco that relies on an organization of iron. The result ? One of the least enjoyable round of 16 matches. Both teams had their chance in extra time. Alone in front of Unai Simon, Walid Cheddira did not cross his shot enough, while Pablo Sarabia found the post at the last second.

Read also: Article reserved for our subscribers 2022 World Cup: Morocco-Spain, a derby-like round of 16

Rid of its complexes, this Moroccan team can dream bigger. “In Africa, we had to be ambitious and that’s what the guys thought, I put that in their headslaunched Walid Regragui. How about winning the World Cup? » Walid, do you have a heart? “We have a heart. When you have a heart, energy and there is love, you win games and frankly well done”answers the Moroccan coach.