World Cup 2022: in Doha, the Indians of Kerala, unexpected fans of the French team 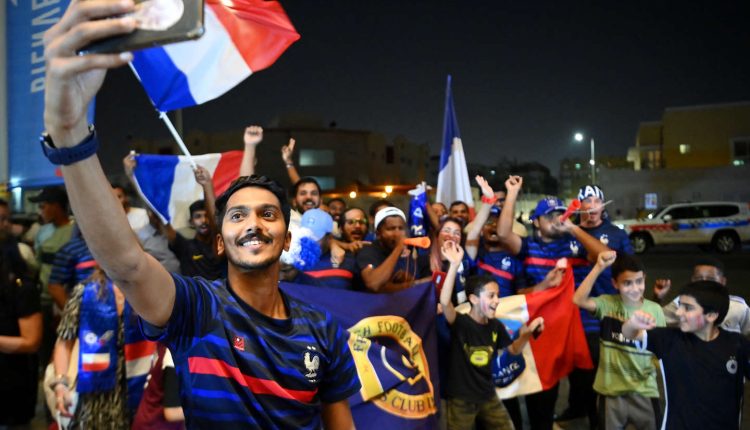 They are Indians, mostly from the state of Kerala, football enthusiasts and unconditional supporters of the France team. In Doha, these fans who praise the science of the game of Antoine Griezmann and the art of dribbling by Kylian Mbappé in a playful “Indian English”, are one of the strangenesses of the World Cup.

Their presence in front of the Hotel des Bleus, when the players’ bus arrived, two days before the start of the competition, had raised some doubts among the journalists. On social networks, these supporters with an unusual profile were then related to the pseudo “fans” paid by Qatar to animate the pre-World Cup.

Read also: Article reserved for our subscribers World Cup 2022: “We were ashamed to say that we were going to Qatar but in the end we will return delighted”

But by dint of hearing them talk about Zidane’s two victorious headers in the 1998 final against Brazil or his less fortunate headbutt in the 2006 final against Italy, observers had to surrender Clearly. The “French Football Fans Club India” is an authentic association of football enthusiasts.

The structure was born in 2013, in Kerala, one of the few Indian states, with West Bengal, where football arouses a real cult, on a par with cricket, India’s national sport. In towns on the Malabar Coast, such as Calicut and Malappuram, seven-a-side football matches, played on clay courts, draw enthusiastic crowds.

From India, Saudi Arabia or the Emirates

Its founding president, Thoufeer Kaitha Valappil, is a young thirty-something who works for a Dubai trading company. From his smartphone, he extracts a series of selfies with Karim Benzema and Olivier Giroud, taken during a recent visit to Clairefontaine, the training center of the Blues. According to him, 260 of the 3,000 members of his club are present in Doha. Some made the trip from India, but most live there, or have come from the United Arab Emirates or Saudi Arabia, where they reside.

In addition to helping its members follow the French team, the supporters’ club organizes tournaments for children, screenings of matches on big screens and numerous charitable actions, such as the distribution of sports equipment in underprivileged neighborhoods.

During the 2018 World Cup in Russia, the first where he managed to go, Thoufeer stood out for a large banner, on which he wrote: “I traveled 7600 km to see the heirs of Zidane play”. “The Russian police were intrigued, they thought it was a message against Putin, he says. Fortunately, Hervé Mougin, the president of the French Irresistibles [l’un des principaux clubs de supporteurs de l’équipe de France] convinced them that I was a real Blues fan. »

You have 11.89% of this article left to read. The following is for subscribers only.