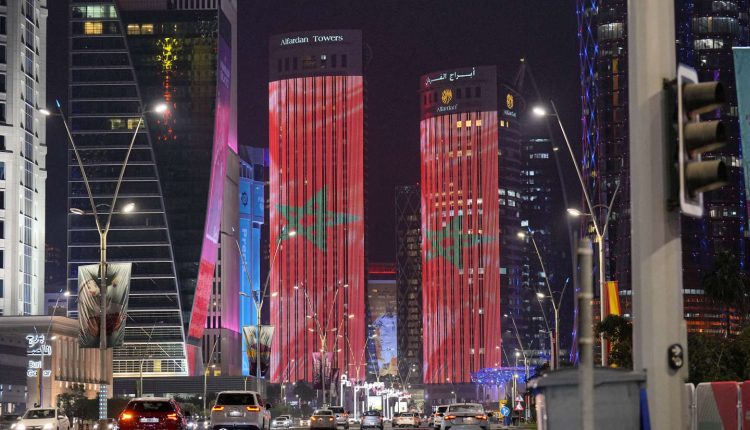 Doha suddenly took on the air of a great football capital on Tuesday, December 6 around 8:45 p.m., when Ashraf Hakimi scored his team’s last shot on goal, synonymous with Morocco’s qualification for the quarter-finals of the World Cup. . The victory (0-0, 3-1 on penalties) had barely been won when motorcades began to descend on the main arteries of the city, all screaming horns and flags held out by beaming passengers. At the same time, the same scenes of jubilation were repeated in the fan zones and in the pedestrian streets of the Msheireb district and the souk Waqif. Songs, cries and dinghies since, beyond the Moroccan success, it is a victory for the Arab world that is in question that evening under the sky of Doha embellished by an almost full moon.

“A victory for an Arab country is as if my national team had won”, Allan exults – an impossible sentence in the great continents of football, Europe and Latin America, where the supporters rather rejoice in the defeat of a neighboring country. This Jordanian forty-year-old could have followed the match at home, since the BeIN Sport channel broadcasts the matches unencrypted in Qatar, and exceptionally in Morocco for this round of 16 unlike any other, a sign of the importance of the event. He preferred to sit in an armchair at the Koora Café, a poorly ventilated shisha bar in the Al Sadd district, with buildings much less flashy than those in the city center or by the sea. downtown metro, citizens (fairly modest Qataris) and workers as immigrant workers are modestly described.

Tuesday evening, they were about fifty, only men (there is only one door for the toilets), to share the dozen screens of the Koora Café to encourage their favorites of the day. Qataris, Egyptians, Jordanians, Iraqis, they all jumped out of their seats around 8.45 p.m. this part of the world will participate in the quarter-finals of the planetary tournament. “We are so proud of them”, smiles Allan, manager in a marketing company. He is far from the only one in Doha to show off this Arab pride.

The street, the hotel lobbies, the souk, the fan zones, the cornice, the surroundings of the stadium and even the most remote suburbs… the Qatari capital has been a permanent theater since the start of the World Cup, a big stage where everyone walks around displaying color: their favorite costume, a football shirt, a more or less faithful replica of their favorite team, or a national flag wrapped around their shoulders, like a cape. But you have to be wary of appearances, colors don’t always tell the whole truth. Omar, for example, a young Iraqi from Baghdad soaking up the morning sun in the deserted corniche fan zone, donned a Brazil T-shirt. He adores Neymar and others, but his favorite team is now Morocco. Like all the Qataris, Saudis, Yemenis or Palestinians to whom we asked the question in the hours preceding the kick-off of Morocco-Spain.

You have 54.26% of this article left to read. The following is for subscribers only.