World Cup 2022: Ghana-Portugal, a parenthesis of hope in a ruined country 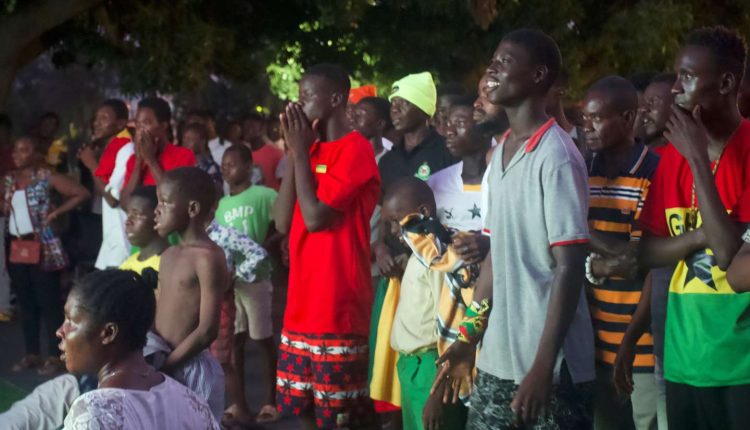 The Ghanaians really needed a moment of football. Gather by the thousands in front of the screens of bars and fanzones, take out the red, black and yellow flags put away after a mediocre CAN, forget for the time of a match the vertiginous plunge of their economy and inflation which is close to 40% for finally see their Black stars shine on the lawn of Stadium 974 in Doha.

In the modest spans of the fanzone of Kanda, a district of Accra, we are worried about the ferocious Portuguese selection, but hope is there. The “Dark Stars” can count on their figurehead André Ayew, their versatile star Thomas Partey and a 22-year-old rising star, Mohammed Kudus. The Serb Milovan Rajevac was thanked after the CAN and replaced by a German-Ghanaian coach, Otto Addo, himself a former national team with fifteen selections on the clock.

The predictions are going well, even among the soldiers in uniform poached earlier from the nearby immigration services. The too few seats are already filled at 3 p.m. and when the match starts, it is difficult to find a free place on the hot asphalt.

“There is only football left to unite”

The first period started gently, despite a few opportunities for Cristiano Ronaldo that made the public scream and the drums beat like a huge heart. Timorous, the Ghanaian team did not touch a single ball in the opposing area during the first 45 minutes. “It’s normal that they are intimidated, we have the youngest selection in the tournament, tempers Thomas Kassi, fresh out of high school, who managed to find a plastic chair. Almost all of our starters are new to the World Cup right now, and the Portuguese are tough guys. »

The goalscorers miss several chances, sometimes seeming embarrassed to receive the ball. But the Ghanaian team is well organised, its defense solid at the moment. When the first half ends in a draw, the fans allow themselves to breathe. For once, almost no one drinks. The fanzone is sponsored by Club, the local beer, and the price of a 33cl glass has been reduced to 5 cedis or 0.33 euros for the occasion. But this still represents a third of the minimum daily wage and in Accra, the atmosphere is not on the expense. “With the economic crisis we are going through these days, the least we can say is that it’s not a party every day, explains one of the few young women in the front row, Roberta Modin. There is nothing left but football to reunite, and to feel the pride of being Ghanaians again. »

You have 52.02% of this article left to read. The following is for subscribers only.

World Cup 2022: almost eliminated but proud of its football, Wales dreams of bringing…

World Cup 2022: the dilemma of Carlos Queiroz, coach of Iran, stuck between football…

Netherlands – Qatar live: follow the match of the 2022 World Cup

World Cup 2022: in Doha, Arab supporters play an air of union of peoples

Paris 2024 Olympics: the French plan to give coaches the means “to snatch the…