Women’s Rugby World Cup: Joanna Grisez wants to “transcribe the energy that we can have at VII” 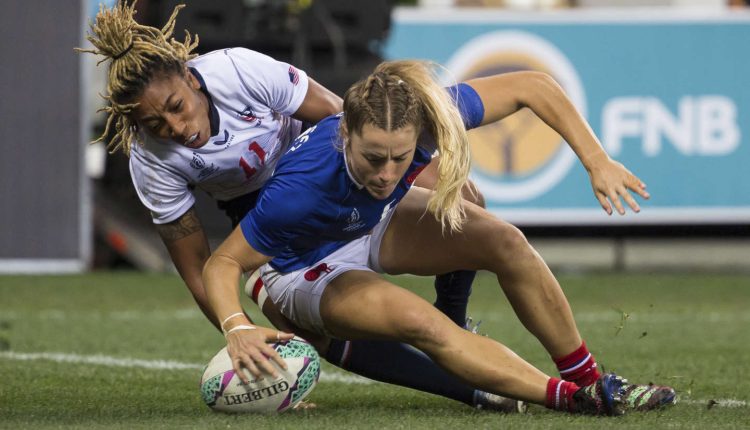 In 2021, Joanna Grisez drew a line under her participation in the Tokyo Olympics due to an injury. A year later, the one who started rugby late, at 19, went on to the World Cups. After winning a bronze medal with the septists in September in Cape Town (South Africa), the 26-year-old player will start on Saturday October 8 at 3:15 a.m. (broadcast on TF1) to defend the colors of France against the South Africa, New Zealand, for the World Cup.

What does this selection represent for you?

It’s a nice revenge, after a fairly difficult year 2021 for me, with frustrations and misunderstandings. I continued to make my way to VII and evolve to XV was not part of my plans. In any case not immediately. It’s all the more beautiful that it happens without my being prepared for it.

How did you react ?

It was a micro surprise. We knew that girls from the VII group were targeted to join the family of players who were preparing for the World Cup, but without having more information. I learned the news after our bronze medal in South Africa. I was watching the final when my coach, David Courteix, told me that I was selected. At the time, I did not realize. I asked him if he was sure and he congratulated me. It was an evening rich in emotions, I was very happy.

How do you approach this new competition, in a new team?

The fact that it’s not one of my goals makes things easier. I tell myself that I am lucky to be here, to experience this. There are a lot of girls who have worked to prepare for this deadline, and many would have liked to be in my place. I’m not going to reinvent anything but I know my rugby and I have to recover the benchmarks at XV, be in tune with the collective and that it happens of course on the ground. I try not to take my head off. I will do what I know how to do and the best I can. My teammates were very welcoming. We all have the same goal and, from then on, everything is going well. Each brings its qualities, its experience and it gives a nice mix.

What will your experience at VII bring to the collective?

The VII requires a lot of energy and reactivity. You have to be perceptive in a very short time. Inevitably, it will not be the same match format [un match de rugby à VII se joue en deux mi-temps de sept minutes, contre deux fois quarante minutes à XV], but I will try to transcribe the energy that we can have at VII. Be very relevant on the balls that I will have, in the duels and on the aggressiveness that I will put in order to be able to concretize the actions of the rest of the group.

How do you approach the management of a different format?

I started playing rugby union so I have leftovers and, even if it’s a bit old, I’m not too worried about it. I know that I adapt easily. It’s going to be different, but it’s doable, and the advantage is that there won’t be several games in a row. It’s good to be able to gather all your energy and put it on for eighty minutes to be able to put on the best performance.

You discovered rugby late, at 19 years old. Seven years later, how do you view your early career?

At that time, I was playing tennis and I realized that I had made the rounds of this sport. I no longer had fun, I was alone and I couldn’t necessarily perform well. I discovered rugby at university. Having been pushed by my teacher at the time and having a very good club near my home made things easier. I hung on thinking to myself, why not. I had some qualities and I had to exploit them, work, and it paid off. I took pleasure with my team, my club, to share totally different moments. I won my first selections for the French university team and everything went on. I held on, telling myself: “If it works, great, if it doesn’t, I won’t have any regrets. »

What are your plans for the rest of your career?

I try to go through the steps one by one. Without going too fast. You have to measure what is happening here, make a very big performance in the first game. The start of a World Cup is very important, and South Africa is a very good team. The objective is to make a very good individual and collective performance, to advance match after match, without projecting yourself. In this kind of event, do not speak too quickly, it is the watchword. For the rest, I will return to VII and, if the XV needs me, I will return there. There is a season in the World Series to ensure, tournaments to prepare for the next deadline: the Paris Games 2024.