Swimming: first tests in the “great” pool for Mary-Ambre Moluh 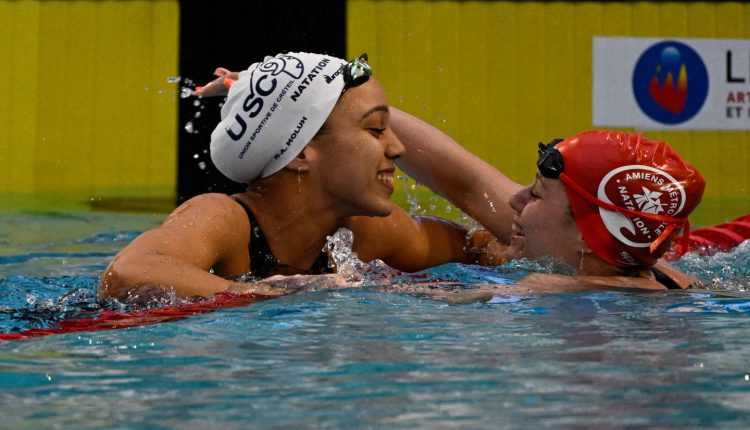 Mary-Ambre Moluh is making a name for herself in the world of swimming. Without making any noise. At 16, the teenager competed in her first senior European championships (in Rome from August 11 to 21). An opportunity, above all, to soak up the major international events. “I take this opportunity to observe how the grown-ups do it. It is very impressive and I feel a bit small”she says.

After the 4×100 mixed medley relay, contested in heats alongside Antoine Viquerat, Clément Secchi and Lucile Tessariol on Friday August 12 (concluded in 6th place in the final, but without her, Marie Wattel and Emma Terebo having been aligned), Marie -Ambre Moluh turns to the individual events in 50m and 100m backstroke, his specialty – respectively Saturday August 13 at 10 a.m. and Monday August 15 at 9:40 a.m.

His performances signed during the junior competitions leave little room for doubt. She represents the promising and ambitious succession of tricolor swimming. However, nothing predestined the young woman from Créteil to such a brilliant future in swimming.

From the basins of Créteil to those of Rome

Her first breaststrokes, the swimmer from USC swimming (Créteil) did them somewhat by chance at the age of six. Her mother enrolls her in lessons in anticipation of stays by the sea. In the water, Mary-Ambre seems to be more at ease than average. From simple learning, she quickly goes to the next level and trains three times a week.

The first competitions are approaching and Mary-Ambre does not think too much about it. In the Moluh family, this is not the watchword. Neither does the cult of swimming. His big brother is the only one to have been around the pools, in leisure.

“My sister tried, she didn’t like it. As for my parents, my father can’t swim and my mother isn’t very athletic either. I brought this into the family! », she laughs. Driven by the collective emulation of her club, she decides to embark on her first challenges.

The rest is qualification for his first senior French championships in the 25m pool at 13 years old and a one-way trip to the National Institute of Sport, Expertise and Performance (INSEP), in Paris.

Supervised by Michel Chrétien and Mathias Mercadal, she benefits from the dynamics instilled by Emma Terebo, 5th in the world in the 100m backstroke in Budapest in June, or Analia Pigrée, bronze medalist in the 50m backstroke during these same Worlds in Hungary.

Read also: Swimming: Analia Pigrée, the future on the back

Mary-Ambre Moluh follows in their footsteps and surprises. Crowned junior European vice-champion in Rome in the 100m backstroke in 2021, she was able to confirm this in July this year. From Otonepi, in Romania, where the world meeting for juniors took place, the young swimmer returned home with five charms around her neck: bronze in the 100m backstroke, silver in the 4×100 freestyle relay, and finally gold in the 50m backstroke then in the ladies’ 4×100 medley relay and in the mixed relay.

A solid piece of luggage laid down in Rome this week. In Italy, Mary-Ambre hopes to create a surprise in the face of European competition. Without being overwhelmed by the importance of the issue.

“My goal is to pass laps, reach the semi-finals and why not a final, but above all, to please myself as much as possible. I don’t want to put too much pressure on myself. I know that I don’t have a position of favorite here in Rome, as it can be in the junior championships, so I will take the opportunity to enjoy myself.she warns.

A further step in this young career with the aim of playing his first Olympic Games in two years, at home.