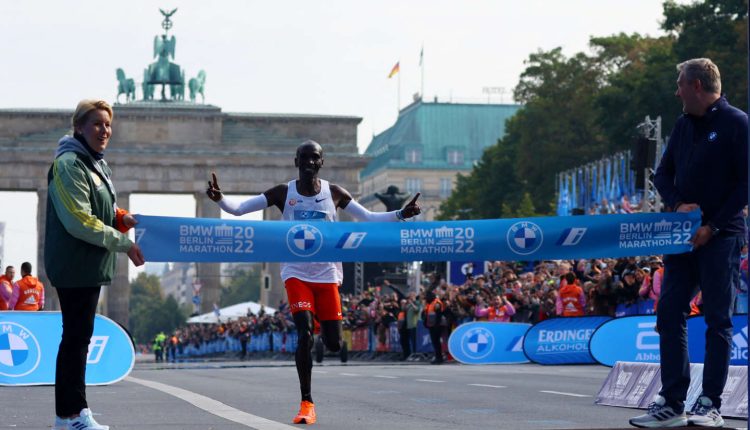 Already considered the greatest marathon runner in the history of sport, the Kenyan Eliud Kipchoge broke, on Sunday September 25 in Berlin, the world record he had set in 2018, also on the German event. Kipchoge completed the traditional distance of 42.195 kilometers in 2 hours 1 minute and 9 seconds. Four years ago, the Kenyan set the record at 2 hours 1 minute and 39 seconds.

To properly measure the performance of the Kenyan, just imagine running a 100 meters in 17 seconds. For those who are in good health, it is usually doable. But repeating the exercise 420 times, without a break, in two hours, is quite another matter. This is the feat that Kipchoge achieved on Sunday in Berlin.

Kipchoge, double Olympic champion, is thus approaching another of his legendary performances, a marathon completed in Vienna, in 2019, in 1 hour 59 minutes and 41 seconds, but which could not be approved due to the particular conditions in which it had been done. In Austria, during an event organized by him, Kipchoge had then been helped by forty-one “hares”, runners accompanying him at the desired speed, who took turns around him in groups of seven every 5 kilometers.

“One day, a human being”

This Sunday in Berlin, a marathon whose course is conducive to the best performance as it is flat, Kipchoge was also accompanied by hares during part of the race. But this time with complete regularity, these dedicated partners disappearing once their mission has been completed, after 25 kilometres.

Halfway through, it was already clear that the world record was in jeopardy, with the Kenyan setting an impressive time of 59 minutes and 51 seconds over the half-marathon distance. At the 30th kilometer, Kipchoge passed in 1 hour 25 minutes and 40 seconds. In the 40th, his time was 1 hour 54 minutes and 49 seconds.

Asked on Friday about his hopes for this event where the best know how to precisely program their performance according to the training carried out previously, Kipchoge said “expect a very good race”. And to add: “If I have a good race, I will beat my personal best”, namely the world record. His initial plan therefore went off without a hitch. Lucid, the Kenyan still did not expect “run under two hours in Berlin”, predicting, however, that“one day a human being will run a normal marathon” by breaking down this symbolic barrier.

This success also allows Kipchoge to equal another record, that of the number of victories during the Berlin marathon, which he now shares with another “legend” of athletics, the Ethiopian Haile Gebreselassie, four times winner of the German race.