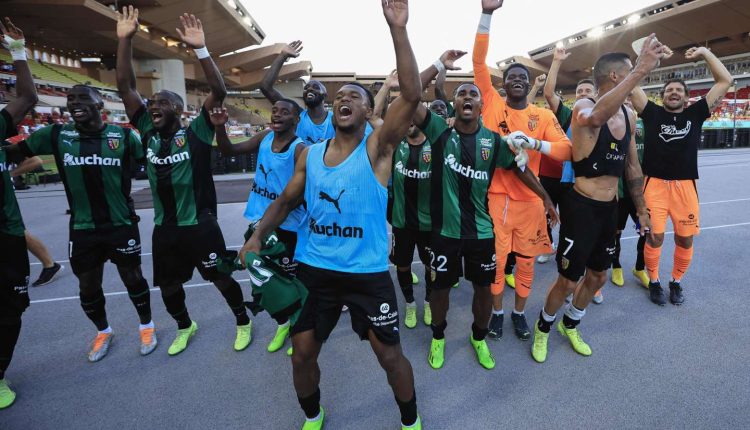 Lhe favorites for the podium continue to be present at the start of the Ligue 1 season. AS Monaco (4-1) – which occupies first place in the standings, ahead of Olympique de Marseille, very happy to win against Nantes (2-1).

Olympique Lyonnais, with one game less, moved back to the top of the standings thanks to its good success against Troyes on Friday (4-1), at the start of this third day of the championship. Auxerre, for its part, went to Montpellier for its very first victory since its return to Ligue 1 (2-1), despite two expulsions during the match.

While Olympique Lyonnais spent a perfect evening at Groupama Stadium on Friday, with a big victory against Troyes (4-1), some of the Lyon supporters still expressed their dissatisfaction. The reason ? The new Adidas shoes, club sponsor, worn by some Lyon players. Green studs, reminiscent of the jersey color of the Saint-Etienne enemy.

The Lyon supporters therefore took out their most beautiful banner, asking the players to “respect traditions”. Four Lyonnais (Malo Gusto, Castello Lukeba, Karl Toko-Ekambi and Tetê) wore these shoes at kick-off. A mini-controversy that made former Rhone Sidney Govou react on his Twitter account: “I made a match with [des chaussures vertes] and three workouts. Bernard Lacombe came to see me, saying to me: “That’s over. You throw them!” What I have done. » Will the Lyonnais listen to their supporters during the match against Reims next Sunday?

Three months ago to the day, on May 21, AS Monaco experienced immense disillusionment. As the 2021-2022 season drew to a close, RC Lens equalized at the Bollaert-Delelis stadium in the very last seconds against the Monegasque club (2-2), depriving the latter of qualification for the group stage of the Champions League. Ninety days later, transferred to the Europa LeagueMonaco experienced a new trauma against the Lensois: a heavy defeat (1-4) in its Louis-II stadium, Saturday afternoon.

3 – In all competitions, Monaco suffered their first defeat by at least 3 goals since December 16… https://t.co/0oYWQWrY9H

The Sang et Or supporters, many of whom made the trip, chambered their opponents at the end of the match… like a year ago, on August 21, 2021, when Lens had already won in Monaco (2-0). The Lensois are the bane of ASM, since they have still not lost in the league against the Monegasque club since their return to the top flight in 2020 and have just ended the series of twelve games without defeat in the League 1 from Monaco. Franck Haise, the coach of Lens, was pleased after the meeting: “It feels good to win matches and, in this way, it’s really fun! » As if to rub the knife in the wound a little more.

He is undoubtedly one of the best free-kick takers in Ligue 1. And when an opportunity arises, Armand Laurienté very often knows how to be dangerous. Promoted at the start of the season, Toulouse got to know the Lorient striker, author of a sublime goal from a free kick after only two minutes of play. The fourth achievement in this exercise for Laurienté, after his free kicks scored against Saint- Etienne and Nantes, during the 2020-2021 season, then against Lyon in 2021-2022.

While he could leave Lorient before the end of the transfer window, Laurienté was not content to score from a free kick in Toulouse. As his team was trailing by one goal ten minutes from the end of the match, the 23-year-old striker provoked a penalty that Ibrahima Koné was responsible for transforming. Thanks to Laurienté, Lorient thus went to seek the point of the draw on the lawn of Toulouse (2-2).

“We conceded two stupid goals, one from a corner, the other after a throw-in. »

Some defeats are more difficult to digest than others. That of FC Nantes in Marseille (1-2), Saturday afternoon, left a bitter taste in Antoine Kombouaré, the coach of the Canaries. While his team had a good game on the lawn of the Stade-Vélodrome and stood up to Igor Tudor’s men, they ended up cracking on a goal from Chancel Mbemba following a scramble from a corner.

After Ludovic Blas equalized from the penalty spot and OM were reduced to ten following Samuel Gigot’s red card, Nantes could legitimately consider leaving Marseille with a draw. It was without counting on the goal against his camp of Nicolas Pallois. “It’s a shame, I put it in the goal when I think there is no one behind”, reacted the Nantes defender after the match. The beautiful header from Pallois deceived goalkeeper Alban Lafont and offered the three points to Marseille. Infuriating.

Nine red cards since the start of the day, seven just during the 3 p.m. multiplex on Sunday. The referees of the French championship have decided to tighten the screw at the start of the season. It all started with the expulsion of Vanderson on Saturday, during the match between Monaco and Lens, and everything accelerated on the lawns of Ligue 1 on Sunday afternoon, with a special mention for the Montpellier-Auxerre meeting, which ended with four red cards, two on each side.

Read also: Article reserved for our subscribers AJ Auxerre in Ligue 1, or the awakening of the sleeping beauty

If the Auxerrois won for the first time since their return to Ligue 1 in Montpellier (2-1), they notably saw their new striker M’Baye Niang be expelled seven minutes after his entry into play at half-time. , for his very first appearance with AJA. Nice, beaten in Clermont (0-1), finished nine against eleven after the expulsions of Mario Lemina and Jean-Clair Todibo. Note that in Ligue 2, AS Saint-Etienne collected three red cards in the same match against Le Havre, during a very heavy defeat at home (0-6). The tension is present on all grounds at the start of the season.

Paris 2024: 87 accidents since the start of Olympic construction

Football: the soap opera of the takeover of Olympique Lyonnais by the American John…

Trump’s company was just convicted of…