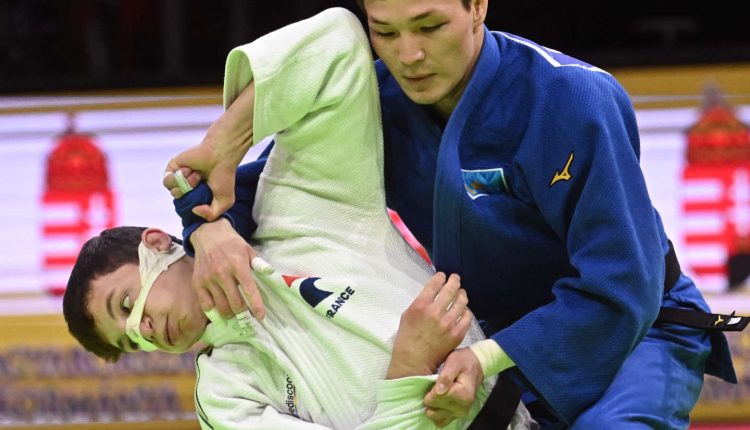 One is much larger than the other, but Kenny Liveze (less than 100 kilos) and Romain Valadier-Picard (less than 60 kilos) are nothing like a Laurel and Hardy comic duo. At 20, these two – who have been dating for eight years at the AC Boulogne-Billancourt club (Hauts-de-Seine) – represent the future of French judo. From October 6 to 13, in Tashkent (Uzbekistan), they are competing in their first senior world championships, after having shone in cadets and juniors.

The first is double world champion in both age categories, with a second title acquired this summer in Ecuador. The second is cadet world vice-champion and double junior bronze medalist. Unlike Kenny Liveze, Romain Valadier-Picard has already obtained results among the greats, by climbing twice on the podium of a Grand Slam, in Paris, in 2021, and in Budapest, in July, a performance which opened the doors to the Worlds for him.

The two judokas embody the next generation of a French men’s team still dependent on the tutelary figure of Teddy Riner, even if the colossus will be absent in Tashkent because of an ankle injury. Conversely, for years, their female counterparts have been numerous to shine on all the international podiums: in the last four editions of the world championships, women have won eleven medals against only three for men.

Liveze, transformed since a stroke

At the Tokyo Games in 2021, Clarisse Agbegnenou – the only individual Olympic champion – and her teammates also particularly distinguished themselves by winning five medals in total against two bronze medals for Riner and the unexpected Luka Mkheidze. By mixed teams, the French and French had managed the feat of bringing down Japan at home.

Coach of the men’s team, Christophe Gagliano appreciates being able to count on this new blood: “It’s an interesting succession. The emergence of Romain and Kenny boosts the older ones a little. » As an experienced coach, the former 1997 world vice-champion warns his young flock: “Real life begins with seniors. There is everything to do. »

Author of fiery and explosive judo, Kenny Liveze does not intend to rest on his laurels. Two months after his world title among young people, he proclaims it: “I’m starting to realize what I did as a junior, now I want to do the same as a senior. » Victim of a stroke in November 2021, fortunately taken care of in time, the Guadeloupean came out of it transformed. “I passed close to death. I enjoy life, I see it differentlyhe confides. Judo is fun. I was under a lot of pressure. Now I practice my judo the way I like it. »

Read also Judo Worlds: in Tokyo, the French team shines thanks to its judokas

The appearance of Liveze and Valadier-Picard has nothing to do with the operation of the Holy Spirit. From 2018, the French Judo Federation decided to have them integrate the National Institute of Sport, Expertise and Performance (Insep), the holy of holies of tricolor sport. “The federation wanted to rejuvenate the troops, we were the guinea pigs, explains Kenny Liveze. After us, they brought in more and more young people. We created a tight-knit group, we suffered together. »

The results came quickly. European medals, team titles in the juniors and, this summer at the Junior Worlds, four medals collected by the young men“more than those of the women’s team”says the world champion “who feels a craze among the male juniors”.

Opposite on the scale – he competes in the smallest weight category – Romain Valadier-Picard shares the ambitions of his comrade, unimpressed at the idea of ​​competing in the Worlds as his first international championships with seniors. “I don’t put more pressure than that. I have always given myself the means to succeedhe says. I hope that our generation will succeed in performing. There’s no reason it shouldn’t work. »

In Tashkent, Romain Valadier-Picard will face international but also national competition, with the selection of another compatriot under 60 kilos, Cédric Revol. “It’s true that having competition makes you progress. If you are qualified because there is no one in front of you and behind you are eliminated in the first round, it is not much userecognizes the young man of 28 years. Conversely, if you are qualified because you are potentially medalist, that changes everything. »

This category is also the very example of the importance of emulation to achieve global success. Apart from the particular case of Teddy Riner, it is the only one where the Blues have won a bronze medal at the last Olympics thanks to Mkheidze, absent due to injury this year. “In a lot of categories, we had a quality and level deficit. In Tokyo, we had a high-performance leader by category but they did not have this engine of competition which could have helped them to seek performance »summarizes Christophe Gagliano.

Even if a good track record among young people does not in any way guarantee success at the higher level, it is practically essential. “There are statistics that say that the majority of Olympic medalists have gone through podiums in cadets and juniors”continues Gagliano.

So, can neophytes Kenny Liveze and Romain Valadier-Picard dream of an Olympic medal in less than two years in Paris? “A year or two ago, I would have said: ‘it will be fair’. The Olympiad is shorter, they will not be targeted by Olympic medalists who have an average age of around 25 or 26 years old”, analyzes the coach. From now on, Christophe Gagliano assumes the bet of precocious talent: “They both have maturity even if Kenny has no reference at this level and Romain may have a bit of a lead in view of Paris. We preferred to skip the stages and maybe that will help them to be ready sooner than expected. »

The main stakeholders almost touch the inaccessible. “Paris 2024? I see that it is more and more possible”asserts Liveze. “For a long time, it was a dream. It is taking on more and more substance and I say to myself, why not?adds Valadier-Picard.