Football: the Blues lose in Denmark two months before the World Cup 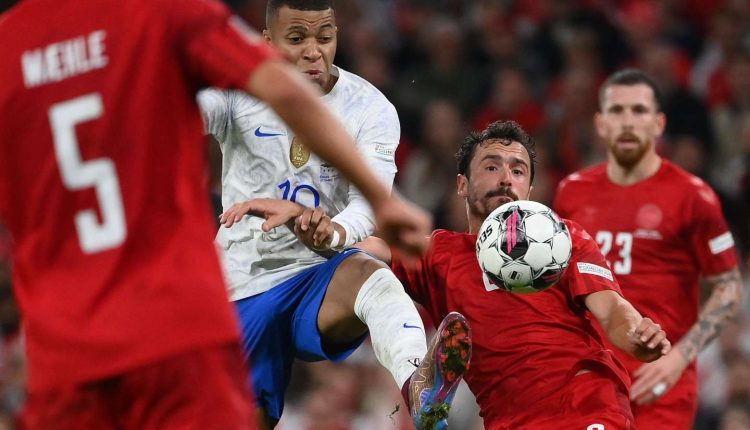 Good news: France keeps its place in Group A of the League of Nations. Bad news: the Blues only owe this maintenance to the defeat of Austria against Croatia, Sunday, September 25 in the evening, while at the same time, they were dominated head, shoulders and feet by Denmark, in Copenhagen, on the sixth and final day of the competition.

For this last match before the World Cup which starts in just under two months in Qatar, the Blues were certainly weakened by a cohort of injured for the shock against the “Danish Dynamite”, attractive semi-finalist of the last Euro, but they had enough reserve to hope to silence the boisterous Parken and its approximately 36,000 red and white supporters.

Alas, they suffered in the face of opposing battering, even sinking before half-time in front of Kasper Dolberg (34e) and Andreas Skov Olsen (39e). A very sad last outing before the big departure for Doha, where they will cross paths with the Danes again on November 26 for their second match of the World Cup.

“The necessary ingredients, we put them three days ago, not today”, noted Didier Deschamps on TF1, referring to the convincing victory against Austria (2-0), Thursday. But “you don’t have to worry”nuanced the coach, aware of being able “recover all players or the vast majority” injured by the World Cup.

In the meantime, the black series is rare for the Blues, as dark as the cascade of packages that accompanied this return to school, from Paul Pogba to N’Golo Kanté, via Hugo Lloris, Presnel Kimpembe, the brothers Theo and Lucas Hernandez, Kingsley Coman and Karim Benzema…

In this context, the boss of the Blues bet on a team much less experienced than usual, populated by players having for some an enormous pressure on the shoulders: that of seducing to integrate the list of the World Cup, expected in the week of November 7.

From the height of his 19 years, Eduardo Camavinga put on the blue for the first time in two years, with a lackluster result. The Real Madrid midfielder lost balls, lacked impact and created too few chances. Deschamps even replaced him at half-time with Youssouf Fofana who, three days after his first flight, was more consistent alongside Aurélien Tchouaméni. The latter is part, on the contrary, of the Blues who have been rising for several months, regardless of his pairs (Pogba, Kanté, Guendouzi, Kamara, Rabiot…).

In Copenhagen, the red wave overwhelmed the young French guard in sequence who, at kick-off, had five selections on average with goalkeeper Alphonse Areola and the three centrals Dayot Upamecano (23), Benoît Badiashile and William Saliba (21 years), the latter being replaced at the break.

Set pieces and crosses flared up and the absence of the usual ramparts, Lloris (forfeited in September) and Raphaël Varane (substitute), was felt. In front, the attackers did not find the key to deceive Kasper Schmeichel, voted player of the match, like Kylian Mbappé’s double chance in the 67e minute, thwarted by the Nice goalkeeper.

A defeat that “feels good”, for Griezmann

Wearing the armband for the first time, Antoine Griezmann had no more success (15e, 70th). Olivier Giroud remained at 49 goals, two units from Thierry Henry’s record, without it being known yet whether he will have the opportunity to approach the mark of his elder.

Deschamps maintains the suspense over the international future of the AC Milan striker, 36, next week. The coach has repeatedly said that he was ” hard “ humanely for the world champion to be confined now to a role of understudy of Karim Benzema, currently package.

Read also: Article reserved for our subscribers Antoine Griezmann, economic substitute in club and executive in difficulty with the Blues

In the context of the Nations League, Luka Modric’s Croatia went on to win 3-1 in Vienna at the same time, which sent Austria into League B of the Nations League, the equivalent of the second division, rather than France which has one more point. The tricolor campaign had gone wrong in June, with four games without a win, and the success against Austria was only a rare brightening in the gloom. But with a full squad, the sky can turn blue again in Qatar.

Read also: Article reserved for our subscribers World Cup in Qatar: “Let’s love football, but not at any price”