FIFA World Cup: Iran protests against the United States for having removed the symbol of Allah from its flag 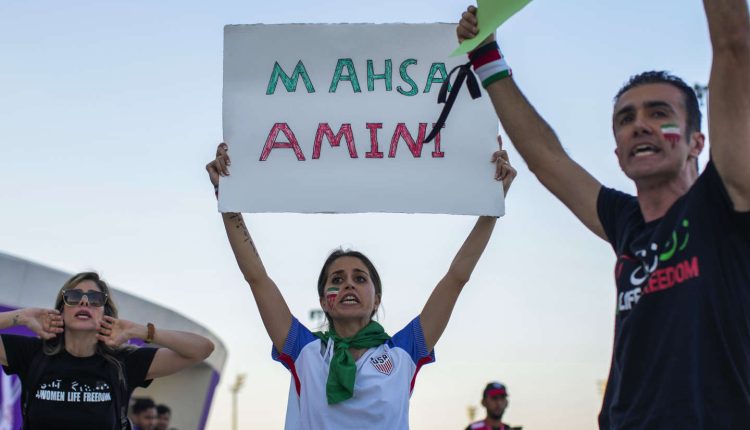 The Iranian Football Federation protested Sunday November 27 against the American federation, which removed the emblem of the Iranian flag representing the word Allah in social media posts ahead of Tuesday’s meeting between the two teams at the 2022 World Cup in Qatar. The two selections will play their qualification in a highly political duel, while the Iranians are in second place in group B, with a point more than the Americans and a point behind England.

“The Iranian Football Federation has sent an email to FIFA demanding that it sends a serious warning to the American federation”said the official IRNA agency. “In an unprofessional act, the American federation removed the emblem representing Allah from the Iranian flag” in social media posts, the agency said. The flag of the Islamic Republic of Iran is composed of three colors, green, white and red, with in the center a calligraphic sign representing the word Allah.

A communication manager for the American federation said it was a gesture “punctual to show [leur] solidarity with women in Iran ». “The flag has never been modified on the official website of the federation”, he added. Later in the day, a spokesperson for the American federation said the controversial social media posts had been deleted. “We continue to support women’s rights in Iran”he nevertheless assured.

Iran and the United States marked memories during the 1998 World Cup with scenes of brotherhood between the players of the two countries. They have not had diplomatic relations since 1980, a few months after the hostage taking of the American embassy in Tehran in November 1979. The incident comes at a time when Iran is the scene of a protest movement triggered on September 16 by the death of Mahsa Amini, a 22-year-old Iranian Kurd, after his arrest by the morality police in Tehran.

On Saturday, another flag affair pitted Kosovo against Serbia. Officials in the tiny state reviled a Serbian flag hanging in a national team locker room ahead of their game against Brazil, showing Kosovo as part of Serbia. Unlike the United States and many European countries, Serbia has never recognized the independence of Kosovo, declared unilaterally in 2008.

Cross-country skiing: Richard Jouve adorns himself with gold in the classic sprint…