FC Barcelona, ​​the new stronghold of women’s football in Europe 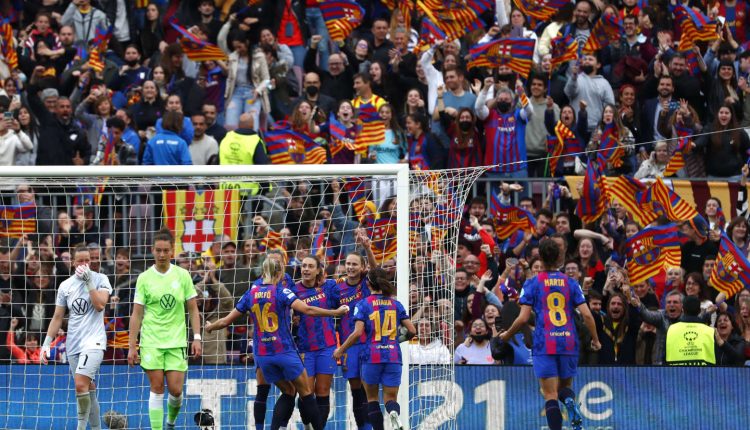 European football experienced a small cataclysm on the evening of May 16, 2021. Crowned European champions after their victory over Chelsea (0-4) in the Champions League final, the FC Barcelona players brought to the Catalan club – and a Spanish formation – a first European Cup, ending the hegemony of Olympique Lyonnais (OL) and the German trio Wolfsburg-Potsdam-Frankfurt, who had monopolized fifteen of the last sixteen editions.

The event was not an accident, because the players of Jonatan Giraldez have the opportunity to retain their title this year. On Saturday May 21, they face OL in the final, at the Juventus Stadium in Turin (Italy).

Read also: Football: Lyonnaises in the final of the Women’s Champions League

A new Spanish victory in the most prestigious European competition would redraw the landscape of women’s football a little more. If it is still too early to speak of a transfer of power, it would nevertheless confirm the emergence of a new heavyweight.

“A desire to shine quickly”

Until then, while Lyon stacked up five consecutive Champions Leagues, between 2016 and 2020, the Catalan “Femeni” had most often been confined to supporting roles in Spain, in the shadow of Atlético de Madrid.

Elise Bussaglia experienced this period and is one of the rare French women to have walked the Catalan turf, between 2017 and 2018. Even if her passage was not crowned with a major title, the former midfielder experienced the transition to the tops. “ In my time, there was already the ambition to build a competitive team, a strong desire to shine quickly on the European scene. It was just the beginnings, but in a short time they managed to be European champions.traces the former international to 192 selections with the Blue.

The Barcelona flight draws its source in 2015, the year of the professionalization of the club, synonymous with restructuring. Until then, the team suffered from a lack of resources, which particularly affected training. “Alexia Putellas, for example [qui a reçu le Ballon d’or de la meilleure footballeuse de l’année 2021], had to leave Barça, because the club had closed two youth teams”recalled, in March, in the columns ofEl Paísthe current sports director of the women, Markel Zubizarreta.

The staff has since corrected the situation. “We now have youth categories ranging from 12 to 19 years old. Two new teams will be created for next season. The academy will increase from 100 to 140 players for the coming year »details, for The worldthe Catalan leader.

As for men, the local pool is at the heart of the sports project. Many players from the Catalan region make up the squad. Among them, the star Alexia Putellas (returned to the club in 2012) or even Aitana Bonmati, symbols of a “Barcelona-style” game identity based on possession of the ball and doubling of passes.

“The precepts and instructions of the game are learned from an early age to children, boys or girls. All Spanish players are trained with the identity of Barça. It creates a competitive team, with a DNA developed over several years, to which we add foreigners to fill certain gaps, such as speed.underlines Elise Bussaglia.

Read also In Spain, the young footballers of Barça crush the championship against the boys

In the summer of 2021, the “Masia” training center hosted its first nine players, when, until then, apprentice footballers were forced to return home after training. Some have been able to evolve with the first team this season (Ona Baradad, Martina Fernandez).

This strategy seems to have paid off. The club has established itself, since 2020, as the steamroller of Iberian football. The Catalans have just won a third title of Spanish champions in a row, achieving a faultless (30 successes in 30 games). The FCB lost only one match this season, against Wolfsburg in the semi-final second leg of the Champions League (2-0).

Elise Bussaglia is formal: “A team that puts in a lot of money is almost guaranteed to win a Champions League in the next three years”, she assures. An equation that the president of Lyon, Jean-Michel Aulas, understood before anyone else, when he created the women’s section in 2004, to make it the most successful club in Europe.

At Barça, the budget has tripled since 2015 (from 1.5 to 4.5 million euros) and the number of employees has quadrupled in the same interval (from 5 to 20 people). This expansion is in particular due to the partnerships forged by the club, starting with the American tool brand Stanley, jersey sponsor since 2018, which provides 3.5 million annually to the “Femeni”. The latter will also benefit, from next season, from the agreement concluded with the Spotify streaming platform, for a sum of 70 million euros per fiscal year, for the next three years. The distribution between the men’s and women’s teams has not yet been decided.

Ho hem tornat a fer, CULERS! We did it again: The WORLDWIDE RECORD is ours! ¡Lo hemos hecho una vez más! https://t.co/wHeMkSsYmN

In an interview given to The Athletic, at the beginning of May, Jean-Michel Aulas insisted on the need to“increase Lyon’s budget in the face of the emergence of Barcelona”. Before adding: “We have tracked two or three players over the last two years and each time the players have gone to Barcelona, ​​​​whose offers [financières] were higher. »

Barcelona also played the increased visibility card with the relocation of big posters to the Nou Camp, the club’s historic stadium. The Champions League semi-final first leg against Wolfsburg (5-1) on April 22 broke the attendance record for a women’s football match, with 91,648 spectators. “In addition to being an excellent team, they fill the stadiums. It can only be an example.greeted, in this regard, OL defender Selma Bacha, after the victory against PSG, in the semi-finals, on April 30.

The Catalan president, Joan Laporta, him, already sees his team as ” the best of the world “. To prove it, it will first be necessary to get rid of the seven-time European champions. In the game of direct confrontations, the advantage goes, for the moment, to the “Fenottes” of Lyon, with three victories in as many European duels.

The African Cup of Nations rescheduled in January 2024

Roger Federer ‘hopes he can come back once again’ at Wimbledon