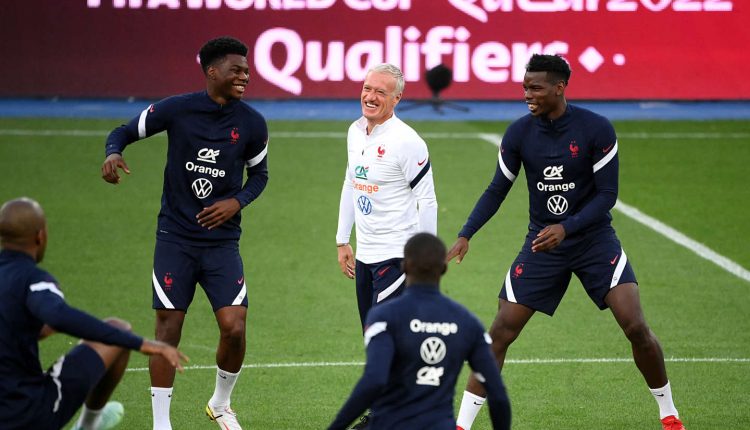 From the midfield, it is said that he is the heart of a team. This “in-game” where battles are won, starting with that of ball control. But in recent months, the electrocardiogram of the France team worries. The sector has contributed to the endless list of packages (twelve) for the last two games of the League of Nations. Paul Pogba, N’Golo Kanté and Adrien Rabiot injured, Didier Deschamps still has to put on his handyman overalls to make his midfield against Austria, Thursday, September 22, at the Stade de France.

A habit for the coach in recent months. During the last twelve meetings of the Blues, this former position has used seven different players (N’Golo Kanté, Paul Pogba, Aurélien Tchouaméni, Mattéo Guendouzi, Boubacar Kamara, Adrien Rabiot and Jordan Veretout). And it’s not over. The returning Eduardo Camavinga and the rookie Youssouf Fofana aspire to start one of the two matches of the week.

Not easy to navigate with the approach of the World Cup (from November 20 to December 18). On paper and in the mind of Didier Deschamps, the Pogba-Kanté duo seems unavoidable. Problem, the two world champions avoid each other in spite of themselves. When one leaves the infirmary, the other returns there. Their last joint tenure dates back to a sad June 28, 2021 in Bucharest and elimination in the round of 16 from the Euro against Switzerland.

Didier Deschamps is not a doctor, but lucid. By dint of seeing his two innkeepers accumulate work stoppages, he admits to thinking about a World Cup without them. “We are talking about two executives who have a very long experience. It is important that they are there but we are never safe”admitted the boss of the Blues, on August 8, in The Parisian.

The two cases are different. On the one hand, Paul Pogba has been delivering a time trial since his meniscus operation in early September after having ruled out this intervention at first to increase his chances of seeing Qatar. Today, they seem weak and Didier Deschamps – despite the high esteem he has for him – refuses to put him in a Paris-Doha on one leg.

And that, even in the name of his importance in the locker room. “Paul is not a GO, he warned on September 15 when giving his last list. He is not there to amuse the gallery. The players called up to the France team are fit to be on the pitch. Paul won’t come if he’s not fit. »

N’Golo Kanté is also having a difficult start to the season, with fewer extra-sporting troubles. Injured in the right thigh since August 15, the man with “fifteen lungs” (dixit Pogba) has had a series of glitches for two years with Chelsea. The former manager of the Blues, Thomas Tuchel, had ended up being irritated by it. “The key players have to be on the pitch and he only plays 40% of the games, noted the German in May. Having it only 40% of the time is a huge problem. » The observation also applies to the Blues with ten matches played out of twenty-two possible in 2021 and 2022.

A (young) man took advantage of the situation to already have his napkin ring in the France team. A year after his first against Bosnia Herzegovina (1-1), Aurélien Tchouaméni gives the impression of already being part of the furniture with his twelve selections. As comfortable on the field as in front of the microphones and the cameras, the 22-year-old player has a string of tenures. His partners change alongside him (Kanté, Gendouzi, Kamara, Rabiot), but he remains.

Better still, his integration into Real Madrid is a success despite the weight of a transfer estimated at 80 million euros. In a sometimes ruthless club with its (dear) recruits, the former Monegasque has put everyone in his pocket: supporters, media and his coach. “He’s a smart player, that’s all,” thus validates Carlo Ancelotti. Today, Aurélien Tchouaméni no longer appears as the first replacement for the Kanté-Pogba duo, but as an indisputable holder and it does not matter if Didier Deschamps remains in a central midfielder with two units or returns to three.

But behind him, it’s much more blurred. The four other midfielders present for these two matches have accumulated 14 matches for the France team. Each has its qualities and its defenders. Starting very strong and not yet of age in 2020, Eduardo Camavinga has finally digested his sensational debut with the Blues and won credit and minutes of play at Real. Which is never trivial. Some also appreciate the activity and the assertive personality of the Marseillais Guendouzi, when Rabiot keeps a good rating of love with the coach, despite sometimes very neutral performances.

In this context very open to competition, even the Monegasque Youssouf Fofana can hope to travel to Doha on the promise of a good match against Austria or Denmark, especially in a list extended to 26 players. It is therefore up to those present to take advantage of this window of opportunity. The absentees are already occupying the thoughts of a Didier Deschamps who wonders who will be able to lay down the law in his environment in November.

Read also: Article reserved for our subscribers Antoine Griezmann, economic substitute in club and executive in difficulty with the Blues