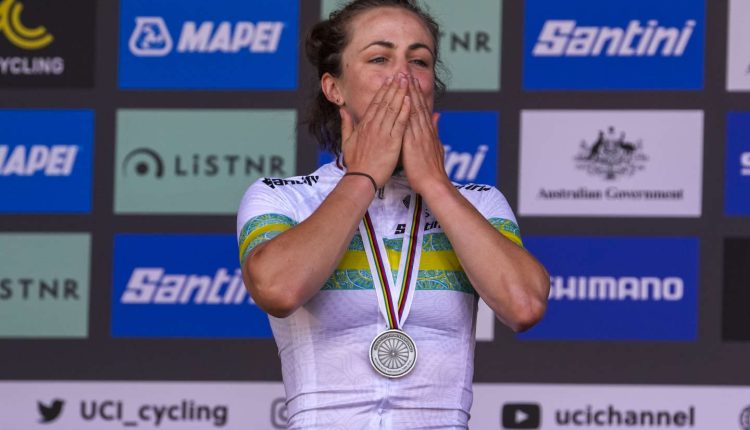 “My goal was to get on the podium, and my dream was to win! » Sunday September 18, Grace Brown came close to her dream. During the inaugural time trial of the World Road Cycling Championships in Wollongong, New South Wales (Australia), the native of Camperdown, in the neighboring state of Victoria, was among the first to start. One after the other, her competitors broke their teeth on the time she achieved. The host country was already imagining the scene: its national champion, victorious at the Commonwealth Games in July, winning the world crown on home soil… Until the arrival of the 45e and last entered, the Dutch Ellen van Dijk, reigning world champion in the specialty, who beat her by twelve seconds.

Grace Brown came very close to the coronation, but her ” objective ” was reached. The Australian gave her country the second women’s silver medal in its history on a world time trial, after that of Anna Wilson in 1999. Above all, it gives her another opportunity to dream, with the road race on Saturday 24 September (Eurosport at 4:15 a.m. and France 3 at 5 a.m.). On the program: a course of 164 kilometers, hilly, dotted with favorable passages “to attack and escape”summarizes the young woman. On paper, this layout is perfectly suited to the qualities of the second of the last Liège-Bastogne-Liège (Belgium).

But the 30-something isn’t the type to err on the side of confidence and she knows she’s a figurehead.outsider against Dutch competition, whose representatives have won four of the last five world titles – last year in Louvain (Belgium), the Italian Elisa Balsamo had beaten Marianne Vos to the wire.

Read also: The Dutch Marianne Vos, icon of the peloton

Six years ago, Grace Brown would never have imagined carrying her country’s hopes in one of the most prestigious competitions in road cycling. For good reason, until then, she practiced… athletics. But repeated injuries got the better of her ambitions, and her father, Tony, eventually convinced her to swap her running sneakers for wedge shoes. “I have as much experience on a bike as Marianne Vos at 14laughs the person concerned. Afterwards, when you have a little maturity, you can more quickly identify what you need to do to improve. »

“It remains a very solitary exercise”

In fact, everything happened very quickly for Grace Brown. At the beginning of 2017, she distinguished herself with two 5e place in the road race and time trial of the Oceania Championships. At the time, the Australian federation still had a women’s development team and retained it in a group of six riders sent to Europe to compete in a few races. But it was really the following year that things accelerated for her. Winner of a scholarship from the Amy Gillett Foundation, allocated to young female cycling talents in her native country, she is put in touch with Rochelle Gilmore, a former local champion, who recruits her in the British formation Wiggle High5. From May to mid-August, it takes part in a series of races on the Old Continent, including La Course by Le Tour de France, a one-day event organized by Amaury Sport Organization (ASO), the managing company of the Grande Boucle.

You have 48.44% of this article left to read. The following is for subscribers only.

World Cup in Qatar: from Strasbourg to Paris, these cities which refuse to broadcast…

Sexual abuse and assault in women’s football: the American Federation faces a…

Mountaineer Marion Poitevin, spokesperson for women in the mountains

Brigitte Henriques, the president of the French Olympic and Sports Committee, filed a…