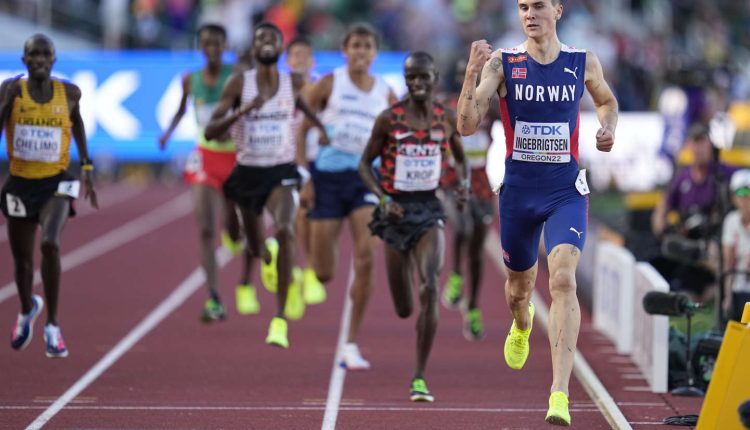 The innate or the acquired. The exceptional case of the Ingebrigtsen family fuels this old debate. Henrik, Filip and Jakob have all been European champions in the 1,500 metres. At 21, Jakob, the youngest of this Norwegian sibling, was also crowned Olympic champion over this distance in Tokyo in 2021 and this year, in July in Eugene (Oregon), he also became vice-world champion.

During these same Worlds in the United States, he added a title in the 5,000 meters to his list, crossing the finish line with a clenched fist, as if stung at having been overtaken in his favorite distance by a unexpected outsider, Englishman Jake Wightman. In Munich, on August 16 and 18, he will line up in the 5,000 and 1,500 meter events of the European championships, of which he will be one of the big stars.

Like his two brothers, Henrik and Filip, European champions in the 1,500 meters in 2012 and 2016 respectively, Jakob Ingebrigtsen, European gold medalist in 2018, was trained by his father, Gjert. Self-taught, the latter is supposed to have developed a revolutionary training method, based on aerobics. A low-intensity type of exercise, maintained for a prolonged period of time, which is said to be very effective in developing endurance and strengthening the heart and lungs.

A Norwegian academic, professor of sports science, who has followed the clan for years and has become very close to it, has looked into the question. Leif Tjelta drew from it, in 2019, a scientific article published in theInternational Journal of Sports Science and Coaching : “Three Norwegian brothers, all European champions in the 1,500 metres: what is the secret? »

The publication examines “how much training, environment and family support were instrumental in development” of the Ingebrigtsen brothers. The scientist points out “gradual progression in training volume, strong family support, mental toughness, high training volume”. And adds: “Throughout their childhood and adolescence, the boys were highly motivated and strongly encouraged to play sports and train by their close family. »

Training from the age of 12

His two brothers gave Jakob his vocation as a runner, initiated him and advised him. “We have always had the mentality that we are the best”, explains the interested party. Since the Tokyo Olympics, the father has let Henrik and Filip take over the coaching of the little prodigy. And Jakob has also become much more decisive in his own training.

“We have found a program – and a philosophy – that is probably one of the best in the world for running fast in the 800 meter event up to the half marathon, assures the champion. So we’re not trying anything new. We stick to what works to be a really good runner. »

If he practiced cross-country skiing, the youngest of the Ingebrigtsen brothers began training at the age of 12. At 17, his running volume already amounted to 140 kilometers per week. At 20, Jakob holds the eighth best performance of all time on his favorite distance, the 1,500 meters (3 min 28 s 32). The world record holder, the Moroccan idol Hicham El Guerrouj, was 24 years old when he ran in 1998 in Rome in 3 min 26 s.

At the start of the year, the Norwegian sensation set his first world record, that of the 1,500 meters indoors (3 min 30 s 60). It was February 17 in Liévin (Pas-de-Calais). A month later, however, he was beaten at the Indoor Worlds in Belgrade by the Ethiopian Samuel Tefera.

Aiming for the feat of Bernard Lagat

In Sandnes, in the south-west of Norway and 20 kilometers from Stavanger, the fourth largest city in the country, the Ingebrigtsen family is renowned for operating in isolation. It never entered the federal system.

To open up a little, the Ingebrigtsen family agreed to be filmed for five years – between 2017 and 2021 – for a documentary series of twenty-five episodes. The program ends with the return of the youngest son once his Olympic feat has been achieved. Jakob comments on his golden race: “On the last lap, I know that [le Kényan Timoty] Cheruiyot will slow the pace and that I’m better than him. »

The mano a mano between the Norwegian and the Kenyan is incredibly intense. The young man irremediably distances the runner from the highlands and triumphs. In Tokyo, Gjert Ingebrigtsen, set back in the bays of the Olympic stadium, raises his arms and isolates himself to shed a few tears. In the country stadium of Sandnes, where family and local fans are gathered in front of a giant screen, the crowd turns into a South American audience and exults. “With Olympic gold, Jakob is at the top in Norwegian sporting history”loose Henrik the mustachioed.

In Eugene in July, Jakob was aiming for a 1,500-5,000 meter double. Only the American (of Kenyan origin) Bernard Lagat achieved such a feat at the Osaka Worlds in 2007. Bet missed by nothing and that he will once again aim for Munich at the European Championships.

The Norwegian made a name for himself in 2018 by achieving this double at the European Championships in Berlin, at only 18 years old. In Germany, he will have to be wary of his new rival, Jake Wightman.