2022 World Cup: for the France team, the floor is no longer in the defense 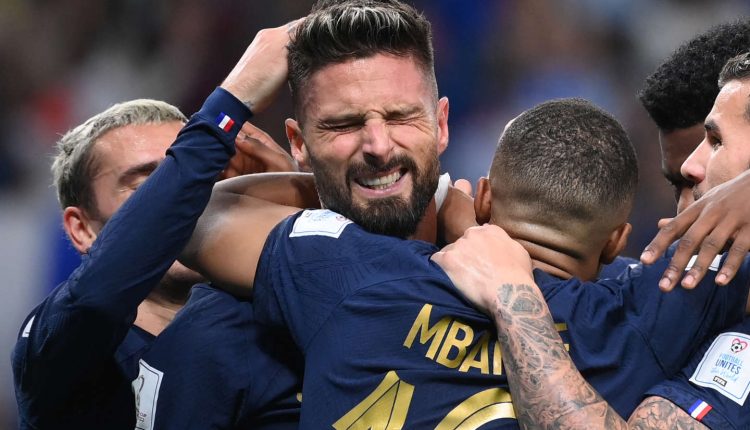 They are not there yet, but if the Blues version 2022 embroider a third star above the rooster on December 18 after a victory in the final, they will owe it in large part to their offensive power. For a French football that was built on the founding dogma of defensive solidity during its first success in the World Cup, in 1998 – and, by contrast, on that of the magnificent losers full of panache of 1982 and 1986 –, the evolution would be revolutionary.

Sunday, December 4, in the round of 16 against Poland, the France team should bet more on the goals and inspirations of Kylian Mbappé or Antoine Griezmann to beat the very good goalkeeper Wojciech Szczesny than on the rigor of his defense to neutralize star scorer Robert Lewandowski. The strength of this team “It’s his range of attacking players. They are all different from each other, and that gives the coach plenty of options. We ask ourselves more questions about the defense and the midfield.analysis, for AFP, Youri Djorkaeff, one of the few offensive players aligned during the 1998 World Cup.

Didier Deschamps is aware of this. When he’s not sending his replacements out for some fresh air like against Tunisia, the coach has a rare strike force, as evidenced by the four goals scored against Australia, two against the Danes. “The opponent knows that there is danger on the left, in the axis, and on the right”, advance the one who can count on the accelerations of Mbappé, the science of the game of Griezmann, the realism of Olivier Giroud and the disconcerting dribbles of Ousmane Dembélé.

It is enough to hear Deschamps, cantor of balance, evoking the Barcelonian Dembélé – the last to arrive in his eleven type – like the one “charged with bringing chaos”. A happy mess promised to the opposing defenses that “DD” has never tasted in his. In 1998, under the leadership of Aimé Jacquet, the victory of the Blues was built on an almost impassable wall, with two goals conceded in seven games. Without going to the excesses of a catenaccio outdated at the end of the 1990s, captains like Marcel Desailly, Lilian Thuram or even Didier Deschamps in person were imbued with this Italian defensive culture, after years spent in Serie A.

Accept and assume the imbalance

Twenty years later, Deschamps went from the role of captain to that of coach when his Blues arrived in Russia with the desire to attack. As illustrated by this comment from a certain Laurent Blanc, world champion converted into a coach: “In 1998, we built our victory on our defense, but that’s not the only way to win. If the Blues take two goals per game, but they score three, we will all be happy too. »

But if Mbappé, 19 at the time, and Griezmann are already present and decisive, it is once again by building a defensive balance – found during the tournament – ​​that the Blues once again win the Grail. With the exception of the round of 16 with an unbridled scenario against the Argentinians (4-3), the French team disgusted Uruguay and Belgium in the next two rounds, without conceding a goal. From an imperial Raphaël Varane behind to Olivier Giroud center forward but first defender, passing by a Samuel Umtiti ready to sacrifice a knee for the fatherland and a Paul Pogba of an unprecedented rigor, the French are then on a mission to protect the goals from Hugo Lloris.

In Qatar, they started their tournament with a line of four defenders (like in Russia), but Deschamps added – and maintained – an extra attacking player. This detail in appearance changes the whole philosophy of the team and gives it its more daring nature. “The fact of sometimes having imbalances also allows us to be more dangerous, more sharp offensively. When you lose on one side, you win on the other”observes Raphaël Varane.

In football, you just have to score a goal more than the opponent, but conceding too many has never been the most direct path to world glory either. “The base is not as solid as in 2018, but Deschamps’ experience will be very important”, predicts Djorkaeff. Despite all the talent of Mbappé, Griezmann and Giroud, French football is once again counting on its “father victory” to find the right balance in this assumed imbalance.