Yemen.. “Presidential” calls for resolving the crisis created by the Houthi militias 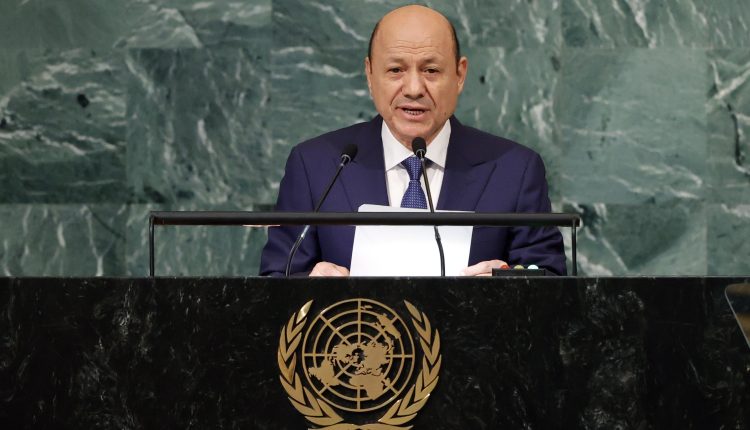 The head of the Yemeni Presidential Leadership Council, Dr. Rashad Al-Alimi, called on the international community to make a decisive shift in its approach to the Yemeni crisis, and to end the human suffering caused by the Houthi militia in Yemen.

In his speech to the United Nations General Assembly in New York, he said: “The transformative solutions that the United Nations General Assembly adopts as its emblem, require consolidating the clear values ​​of peace building that arises as a result of the establishment of a stable government, as well as possessing a decisive deterrent to protect the political process and open the way for it by all means.” .

He added, “The international community has a better option for Yemen, which is to support the legitimate government to be able to win the values ​​of freedom, peace and civil coexistence,” noting that the longer the resolution of the crisis in Yemen, the greater the losses and the Houthi group turned against the national consensus in the country.

While Al-Alimi welcomed the renewal of the humanitarian truce, which expires at the beginning of next October, he held the international community responsible for the horrific violations committed by the Houthi group, including the continued suffering of tens of thousands of our displaced citizens, the detainees, the kidnapped, the disappeared and the detainees.

For his part, Yemeni Foreign Minister Ahmed bin Mubarak stressed during a ministerial meeting of the Organization of Islamic Cooperation in New York that the Presidential Leadership Council will be a peace council and will work to end war and bring peace, in addition to being a defense and force council as well.

The Ukrainian army announces the liberation of 5 new villages