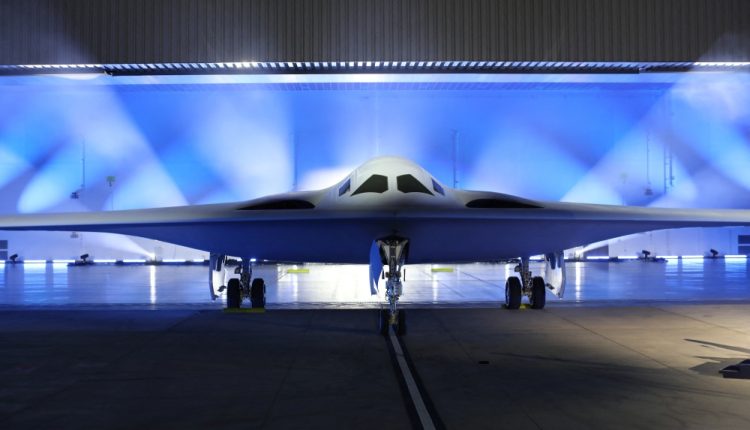 The United States unveiled its new stealth strategic bomber, the B-21 Raider, which can operate without a crew and is capable of carrying out long-range nuclear strikes in addition to using conventional weapons.

The unveiling ceremony of the meticulously designed aircraft, at Northrop Grumman’s B-21 manufacturing facility in Palmdale, California, opened with the United States national anthem as vintage bombers flew over a crowd of senior American officials.

As the aircraft’s hangar doors slowly opened, blaring music played and lights flashed before the crowd clapped as the tarp was pulled back and a sleek gray bomber, which could cost $700 million a unit, emerged.

“The B-21 Raider is the first strategic bomber in more than three decades,” US Secretary of Defense Lloyd Austin said during the ceremony, stressing that it is “a testament to America’s constant progress in ingenuity and innovation.”

Austin praised the aircraft’s range. “No long-range bomber can match it in efficiency,” he said.
Similar to the F-22 and F-35 warplanes, the B-21 was equipped with stealth technology that allows it to limit its impact, through its shape and the materials that were used to make it, making it difficult for adversaries to detect it.

“Even the most advanced air defense systems will have difficulty detecting the B-21 in the sky,” Austin said.

Austin added that the plane was also built with an “open system architecture” that allows for the integration of “new weapons that have not even been invented yet.”

Amy Nelson of the Brookings Institution said, “The B-21 not only has a dual capability that allows it to strike with nuclear missiles and conventional weapons, but it can also launch long and short-range missiles.”

He did not mention during the ceremony the possibility of flying the plane without a crew. US Air Force spokeswoman Anne Stefanik said the plane “is equipped with this capability, but a decision has not yet been made to fly it uncrewed.”

This bomber will be an essential part of the US “nuclear triangle”, which consists of weapons that can be launched from land, air and sea.